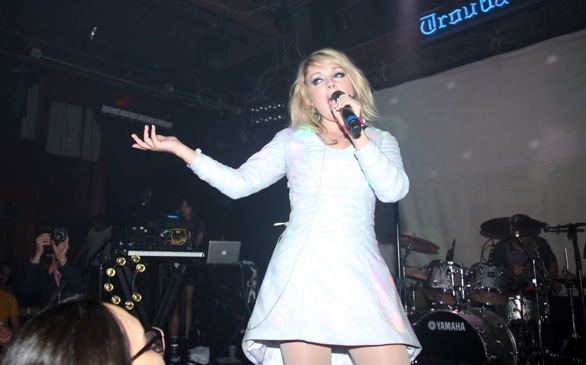 One of the most iconic moments of Quentin Tarantino’s Kill Bill: Vol. 2 is the showdown between “the blondes,” Uma Thurman and Daryl Hannah. Last night at the Troubadour in West Hollywood, audience members witnessed the musical version of that battle with MNDR and Little Boots on Monday night.

MNDR, embodying Daryl Hannah’s role, opened the show wearing thigh-high black leather boots and a romper inspired by an Australian frilled neck lizard. As she stepped on the stage, MNDR asked everyone to interact and dance.

During her six-song set, MNDR performed three new songs that will appear on her new album project, which she said is close to being completed. The album project features the club-hit, “Feed Me Diamonds.” The music video stars Raven, a beloved contestant from "Rupaul’s Drag Race," lip-synching and transforming from a gender-queer mannequin into a fierce woman. It turns out Raven and fellow contestant Morgan McMichaels came out to support MNDR that night.

Next on deck was Little Boots herself. The excitement from MNDR’s set boiled and poured over into Little Boots' set. As she descended down a flight of wooden stairs off to the side of the stage, she greeted the crowd in a flowy see-through black cape with a black leotard underneath. Little Boots was met with thunderous applause and immediately started singing “Motorway” from her second album, Nocturnes. By the end of the first song, the standing room-only space became more intimate. More people squeezed in, and fans pushed toward the front of the stage, trying to get closer.

After the second song, “Confusion,” Little Boots said, “I’m moving to L.A. next year. I always dedicate this song to Los Angeles because I wrote it here.”

Everyone collectively screamed, waiting for the band members to drop into the heavy synthpop dreaminess of “New In Town.” The crowd screamed for more as she performed “Stuck on Repeat,” “Beat Beat,” “Meddle” and “Earthquake.”

After killing “Satellite,” the 11th song of the night, Little Boots and her band members bowed and ran offstage. They returned after a 2-minute pause to perform her most popular and remixed tracks, “Remedy” and “Shake.” In Gaga-esque fashion, Little Boots changed out of her black cape and donned a white dress fitted with orange, green and red neon lights that glowed hot like a retro Vegas sign.

This battle of the blondes will definitely go down in Troubadour history as a legendary show.