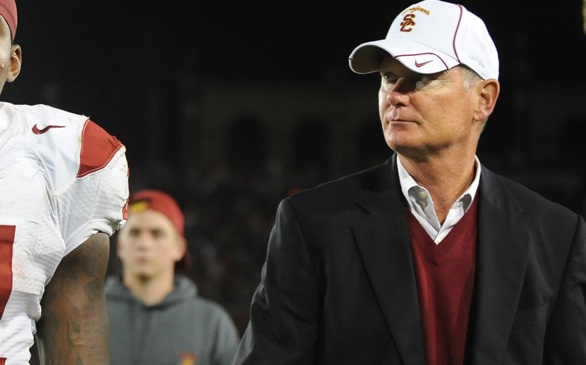 USC athletic director Pat Haden said he met with the NCAA in Indianapolis this week and requested relief from scholarship reductions.

The Trojans started the season with 70 players on scholarship but Coach Lane Kiffin said he will take only 56 “recruited scholarship players” to Saturday’s Arizona State game.

“We proposed creative ‘outside the box’ solutions to the scholarship issues resulting from the injuries and transfers experienced by our football team over the past three seasons,” Haden said in a statement. “After candid discussions, the NCAA asked us to provide additional information and indicated it would study our suggestions.

“Because time is of the essence regarding these issues, we have asked for the NCAA’s response as soon as practical.”

Haden said he met with the NCAA to discuss other issues like pay-for-play for athletes, but the most newsworthy item quickly became scholarship reductions after the NCAA’s decision to restore scholarships to Penn State.

“The current situation is certainly not what was envisioned, nor is it in the best interests of our student-athletes’ welfare.”

Kiffin said Haden regularly meets with the NCAA but, “it just doesn’t make the news.”

One possible obstacle for USC is that its case followed the NCAA process while the Penn State case did not.

Season over for trio

None of the three played in recent games and Banner was on the scout team a few weeks ago.

Shelton played in the season-opener against Hawaii but gave up a 60-yard touchdown pass with 30 seconds left in the game and fell out of favor.