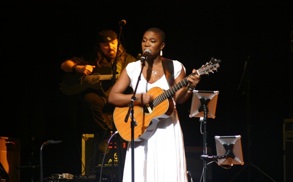 India.Arie showed us her many talents, which include playing the guitar.
(Credit: Sydney Champion)

After releasing her fifth studio album Soulbird Presents A SongVersation with India.Arie on June 25, India.Arie has been performing intimate shows throughout North America. Her fifth stop was in the City of Angels.

When India.Aria appeared on stage after opener Gramps Morgan (a hilarious and talented reggae artist), it was as if we were introduced to a soul angel: she donned a white, flowy dress (she mentioned her mom made it for her) that stood out beautifully in the dark club, under the deep purple and blue lights.

Early on during the show, India.Arie performed her famous hits such as “Video” and “I Am Not My Hair.” When she performed the latter, she surprised the whole audience by snatching off her wig, revealing a shaved, almost-bald head underneath. It was beautiful and inspiring to see India.Arie comfortable in her natural hair, and the crowd showed their approval with thunderous cheers and applause.

From there, India.Arie interacted with fans, many times holding out the microphone for us to sing the lyrics to songs such as “Brown Skin” and “Cocoa Butter.” On breaks, she would tell us funny stories about herself, revealing that she has a couple of split personalities.

In between almost every song (or every other song), the stage would go black and India.Arie would leave momentarily. Above the stage, quotes by famous people appeared on screen. This technique was nice; it provided a smooth transition from song to song and allowed audiences to really ponder the meaning behind each saying as they guessed which song India would sing next.

Even though it was clear that India.Arie’s earlier hits drew the strongest reactions from the crowd, there was one song off of SongVersation that left quite an impact: “Life I Know.” During this song, India.Arie became vulnerable; she revealed that she would ask God where her husband was if she had a chance (the singer-songwriter is currently unmarried). She sang:

“I have kept this secret/From myself for far too long/The truth is, I’m confused/about where I belong/I’m not a mother or a wife/And I’m living such a complicated life/And this is the life I know.”

Singing with such honesty and emotion, it was hard not to get a little misty-eyed during this performance.

The mood got a little more upbeat when India.Arie delivered a surprise and called two women to come up. One of the women grabbed the other by the hand and led her onstage as India.Arie exited. Then, in front of everyone, the woman got down on one knee and proposed to her girlfriend. The girlfriend said “yes,” and India.Arie came back on stage, jumping, smiling and hugging the couple.

India.Arie showed L.A. that she is not afraid to be honest, quirky, silly, generous and, most importantly, herself. With beautiful, soulful lyrics that leave you feeling inspired and proud, India.Arie is a magical songstress you have to see perform live if you get the chance.