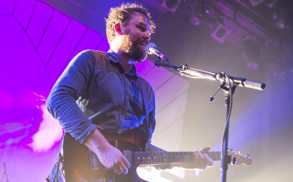 After a great opening set from Augustine, the audience was well warmed up for Scottish indie rock band Frightened Rabbit to take the stage at the Avalon in Hollywood on Tuesday night.

Band members Scott Hutchison, Grant Hutchison, Billy Kennedy, Andy Monaghan and Gordon Skene came out on stage with a light show keeping them mysterious while the first song played. They were greeted by a slightly antsy and very happy audience who, with the beginning of every song, screamed with joy.

The band has been on a multiple-city North American tour, and there have clearly been some bumps in the road, as revealed through a little story Scott Hutchison told. On their way into the country, the band ran into some trouble in Chicago. Thankfully, things were sorted out, and the guys had a better trip while in L.A. “Not everyone likes people from L.A. We love you guys!” yelled Hutchison, although he did use more colorful language to tell the story. He is one of the few front men whose banter is truly entertaining.

When the songs started back up, the band took over the venue with their accent-filled vocals and lovely melodies. It was a great party and a great band for the Avalon.

The band is staying on the road in the U.S. for a few more weeks before heading closer to their native country and the U.K. In support of their latest EP Late March, Death March!, the band is absolutely making many more fans on their adventures.

Listening to some conversations in the audience, it was clear that while not everyone in the venue knew every word to the songs, they were all fans, new and loyal.