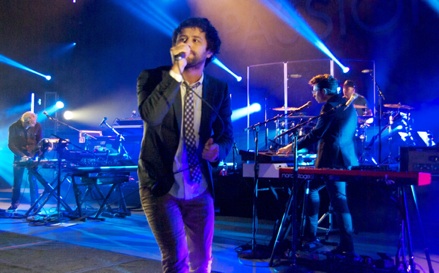 It was one of the only things that Passion Pit vocalist Michael Angelakos could get out in between songs Friday night. He must have said it at least four or five times, and you can't blame him. For a lot of bands, their first show at the iconic Greek Theater is an indication that they finally made it. It seemed the whole group felt that way last night. You could see it in their demeanor as they really took their time with the show and savored the performance.

Passion Pit has most definitely gotten a long stretch of tour dates out of their most recent album, Gossamer. Since its release in July 2012, they’ve played two shows in Los Angeles, international dates, and a variety of festival appearances, including one at Coachella. Needless to say, everyone in the crowd was pretty excited when Angelakos closed the show by announcing that the next time the band came to town, it would be with a new album.

The group has a history of putting on really fun shows, and Friday night’s performance at the Greek was no different. The band was on point; they really sounded great. Angelakos didn’t seem like he was straining to get through all of the notes during a performance that’s sung almost entirely in falsetto. The song "Sleepyhead" sounded a little flat, but it was passable.

Let’s not forget about the rest of the band, though. The keyboards, as always, sounded great, but it was the drummer, Nathan Donmoyer, who really stood out. He threw in a few sections of solos at the end of "Silvia" that were just outstanding. They were subtle but intricate. His fills were on point too. He really found a way to put a personal spin on each song.

The place really erupted when the band went into "Carried Away" for its third song. That song was a standout and so was "Take a Walk." Say what you want about that track. I don’t like it either, but it was one of the best songs they played last night. In fact, it was the one song that got everyone back on their feet after a mid-set slump. For a brief minute, you could forget about the fact that the radio had killed that song only six months ago.

Of course, Passion Pit closed the show with "Little Secrets;" there really isn’t a better number they could've closed with. The song is just so contagious that you can’t help but love it.

At the end of the night, everyone seemed pretty happy as they cruised out to the parking lot. There was no need to scream or chant for another song; the show ended right when it was supposed to.