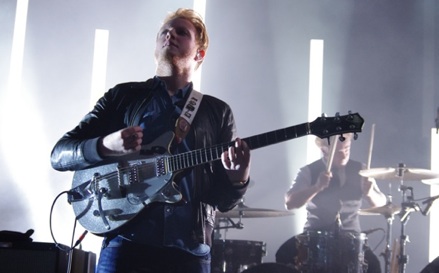 Having Halloween fall during the week does certain things to one’s event planning. One weekend of partying effectively turns into an excuse for two. It also makes room for two costumes, two to three additional hangovers and twice as many good times and regrets. But not for everyone, as made immediately evident Saturday night at the Greek Theater.

In a sharp contrast to the previous night’s Deftones show, nearly every single person in this audience was Caucasian, with roughly 45 percent wearing some sort of corrective lenses. There wasn’t a costume to be seen either, as many of those set on partying in character would likely be seen at HARD's yearly Day of the Dead festival taking place at L.A. Historic Park the same night. That’s not to say people weren’t partying at the Greek, though. By the end of the night, many were nice and drunk, celebrating with their own 40-proof version of the Halloween spirits.

First opener St. Lucia seemed positively thrilled to be playing one of L.A.’s great outdoor venues, and with its first LP being released just several weeks earlier, the band had good reason. Despite its lack of mainstream exposure, there’s something immediately familiar about St. Lucia’s music, and the band really seemed to catch many in the crowd off guard.

It’s impossible to listen to St. Lucia without a grin. Its brand of throwback electronic pop can be compared to Twin Shadow and (at times) M83, and it’s almost remarkable how many bonafide singles reside on its debut album. Playing newer songs such as “Elevate” along with several older hits off its previous EP, the band was an amazing warm-up into what would become a dance party.

Current radio kingpins Capital Cities took to the stage next, donning matching white jackets and an infectious energy that was hard not to get caught up in. Featuring the remarkable talent of trumpet player Spencer Ludwig on stage left, the five-piece band wasted no time diving into its admittedly limited arsenal of crowd pleasers.

Naturally, no Capital Cities set would be complete without “Safe and Sound,” the single that has propelled the amateur band into near instant stardom. In general, the band surprised with a unique formula that’s in dire need of material. Considering its current success, it’s safe to say that Capital Cities has no immediate reason to fill this gap.

Irish native Two Door Cinema Club has always seemed to have a concrete indie fanbase, but a headlining show at the Greek proves just how big the band has become. Several recent radio singles, including its first live track of the night “Sleep Alone,” have proved that the band has the legs to carry the weight of such success.

With a surprisingly amazing light setup as a backdrop, the band sustained the energy throughout its set despite a lack of variety. Case in point, many of the band's songs seem to have the same identical drum beat and back and forth guitar rhythms, leading many of the uninitiated in the crowd to grow bored. Considering it’s the band's signature style that brought it to the Greek in the first place, it certainly has something worth selling.

While it didn’t possess the mind-melting dubstep and scantily clad costumes of HARD Day of the Dead, this stacked bill at the Greek was nothing to sneeze at and gave many a mid-level, mellow alternative to getting blacked out dressed as a Pizza slice - or enduring the embarrassing walk of shame that followed next day.