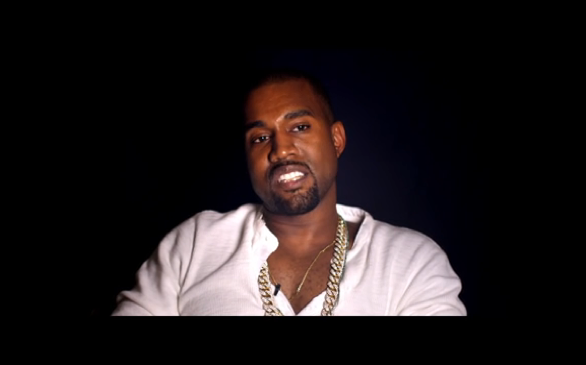 Kanye West talks about fame and his mother in this music video.
(Credit: Screenshot of video.)

Thirty Seconds to Mars' "City of Angels" music video is perhaps the most honest, accurate portrayal of Los Angeles that I've seen as far as music videos go.

This 11-minute video, directed by Jared Leto, features numerous celebrities talking about the harsh realities of the "city of dreams."

"I'm a Disney kid...people are always trying to tell me what to do...If you want to do what you want to do, then go do it and work really hard." - Selena Gomez

"Fame is...an illusion. Things can be given to you quite easily, but they also get ripped away as well." - Ashely Olsen

"This city took my mother, but this city also gave me my child." - Kanye West

"The City of Angels is where I was able to find myself again. The real me." - Lindsey Lohan

"Dreams and expectations also have the very dark flip side of disappointment. Broken dreams." - James Franco

Mixed in with these celebs' soundbites are interviews with other Angelenos, the Angelenos we see on an everyday basis such as homeless people, street performers, celebrity impersonators and more. They briefly tell their stories of struggle in L.A, including living on the streets, being poor and not having a family.

With Thirty Seconds to Mars singing on and off throughout the 11 minutes, this "City of Angels" music video is powerful as it reveals the complexities of living in L.A.: you have a dream, you chase after it, you successfully accomplish it...but sometimes, you deal with failure along the way.