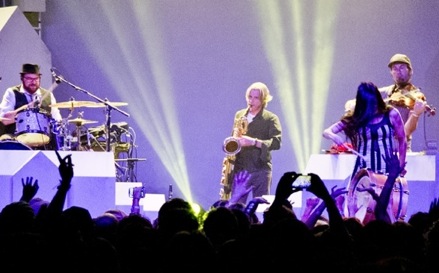 'Boring' is not a word used to describe a Beats Antique show.
(Credit: Melissa Hebeler)

What makes Beats Antique so unique? Is it the band’s never-ending affinity for the obscure or its wildly eccentric shows? Maybe it’s both. After all, Friday night’s headlining gig at the Fonda Theatre did nothing to suggest that neither is true.

Wrapping up the first act of its A Thousand Faces tour with a return to California last weekend, the Oakland-based trio proved once again that it’s never short on creativity when it comes to entertaining an audience.

However, that’s really been the case since 2007, when Beats Antique first started captivating crowds with its distinct brand of neo-gypsy electronica, tribal fusion dance and psychedelic performance art.

Now, thanks to a reinvented stage setup that coincides with last month’s release of A Thousand Faces: Act 1, it’s been a whole new experience for Beats Antique fans this fall. For multi-instrumentalist David Satori and percussionist Tommy "Sidecar" Cappel, that seems to be their intention every time they bring a new show on the road.

At the Fonda, they spent the first hour of a 90-minute set acquainting us with new material — including the exotically dark “Beelzebub” that features Primus bassist Les Claypool — before turning to some old favorites like “Egyptic” from 2010’s Blind Threshold during its three-song encore.

Of course, there’s one component to a Beats Antique show that hasn’t disappeared over the years, and that’s the hypnotic belly dancing of Zoe Jakes.

You can always count on Jakes, who incorporates elements of tango, popping and Indian dance into her own style, to be a focal point at any of the group's shows, and Friday was no different.

Donning an Egyptian goddess headdress at one point and a rack of antlers at another, Jakes mesmerized our inquisitive eyeballs with every twist and turn she took. Though it was originally record producer Miles Copeland who discovered Jakes with the Bellydance Superstars, Satori deserves just as much of the credit for exposing her talent to the masses.

Satori, who pursued his curiosity for world music at a young age by earning a degree from CalArts, cannot only take comfort in that, but also in the career he’s carved out for himself with the formally trained Cappel behind the drums.

Whether that means strapping on some headgear in the middle of a show and joining a crew of go-go dancers at the front of the stage, then so be it. But with Satori leading the charge, there’s never a dull moment for Beats Antique.