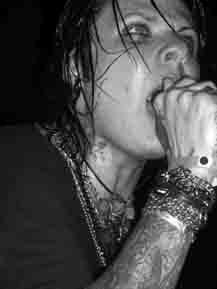 Going to an Open Hand show is a lot like witnessing a mediocre bar band. If you’re all liquored up and not really paying attention, they sound great, but if you’re somewhat sober and actually there for a show, you’ll notice there really isn’t much of one to begin with.

As people exited the Troubadour into January’s brisk night air, those who actually came to see Open Hand were probably asking themselves why they didn’t just save the gas money and listen to their CD instead.

Playing up their modern, indie rock, the members of Open Hand are a handful of talented musicians who’ve received praise for their solid musicianship on the 2005 release You and Me. Yet, the band has consistently remained just under the radar. Perhaps it has something to do with its lackluster attempts at wowing audiences onstage.

Even if the band had made a few new fans through the duration of its set, you’ve still got to wonder why this group was headlining worthy. Maybe in a different setting, playing with different bands they may have been, but unless you’re Avenged Sevenfold, it would have been nearly impossible to outdo the utter chaos that is Bullets and Octane.

Frontman Gene Louis is like a wild beast, just let out of captivity. Before the band had a chance to play two full songs and before beads of sweat from the bright lights even had time to form, he was drenching himself in water, ripping off his shirt and unleashing the animal within.

Even certain members of the audience began to turn from composed and mild-mannered to raging sexual stallions. Evidently it had something to do with Louis’ captivating performance. As the band pumped through its set list with favorites such as "Save Me Sorrow" and "Pirates," from 2004’s The Revelry, and new material "Going Blind" and "My Disease," from the upcoming In the Mouth of the Young, Louis’ quirky, amplified Scott Weiland-esque movements made it easy to forget that there are actually other members in the band. Even so, the band’s music has its way of seeping under your skin, working you up into a frenzy, and letting out the rebellion in you.

It’s that power, the way the band commands your attention and the overall debauchery of its stage show that makes it hard to compete with.

So, when Open Hand took the stage it was as though they knew they had already been defeated. Without even as much of a "hey, how you doing" or "are you having fun tonight," the band began playing, song after song in one of the most subdued, lifeless performances seen in recent memory.

Frontman Justin Isham rarely veered from behind his microphone stand, not that it mattered because his vocals could barely be heard through the overpowering music. The only member of the band who seemed even remotely excited to be there was Breanne Martin, the only female member of the group, whose actual musical contribution to the band is questionable. Oddly enough her moment center stage for "Take No Action" was the most memorable of the band’s set.

If Open Hand learns to work the crowd a bit better, tune down the music and up the vocals, they just might have the opportunity to move out of the shadows of so many other bands in their genre and have the spotlight shine on them for once.
Article posted on 1/23/2006
This article has been viewed 1748 times.