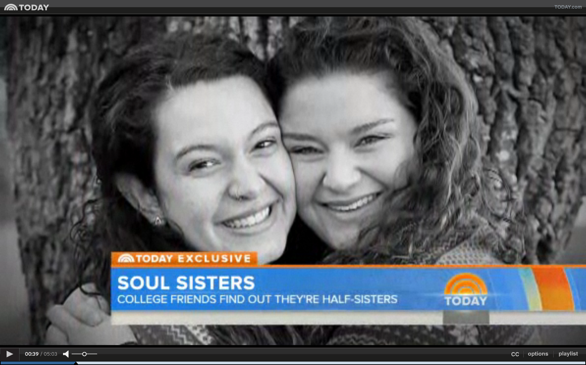 These students had no idea they were half-sisters.
(Credit: The TODAY Show.)

What are the odds one of your friends is actually your sister? Probably slim to none, right?

Well, that's exactly what happened to Tulane University freshmen Mikayla Stern-Ellis,19, and Emily Nappi,18: they found out they are half-sisters, reports the TODAY Show. Stern-Ellis and Nappi both share the same biological birth father who donated sperm to their mothers.

The two met during the roommate search process. While filling out the survey portion, they found out they had a lot in common: they love acting, they were both raised in California, they have similar taste in clothes, and they even look alike. But perhaps the biggest similarity between them is that they both have a Colombian sperm donor.

When Stern-Ellis posted about her "Colombian sperm donor" on Facebook and Nappi saw it, the girls asked their mothers for help. They tried to identify their sperm donors, and they realized their donor numbers matched each others, making them half-siblings.