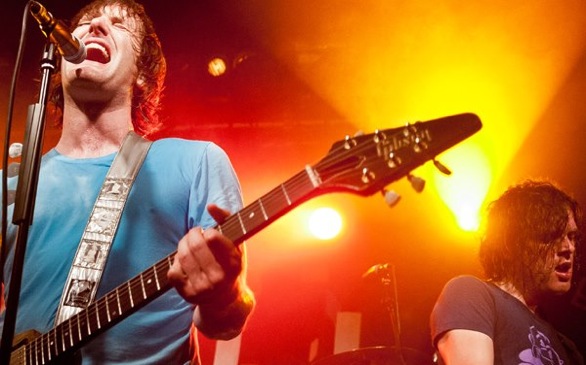 Ash hasn't performed in LA in a decade.
(Credit: Facebook.com/ash)

They may have saved “Burn Baby Burn” for the very last, but Ash’s entire show at the Echo was nothing short of blazing.

Fuzzy, Replacements-influenced numbers such as “Girl From Mars” and “Jack Names the Planets” elated the fans. One super enthusiast dressed as comic-book hero Robin leapt onstage during the encore, thrashing his cape like he was fending off a swarm of bees. Wheeler and bassist Mark Hamilton laughed as their roadie escorted the wayward do-gooder away.

The opening acts infused elements of fun into their performances as well. The night kicked off with Dreamland, a self-proclaimed “surfgaze” group led by War Tapes’ Neil Popkin. After a couple false starts, they kicked their enjoyable set into full gear.

Then, London’s Deaf Havana charged ahead with their polished sound— a sort of Kings of Leon emo take. Singer James Veck-Gilodi joked about America’s high booze prices. “Land of the free?” he said with a chuckle and a choice curse word.

Ash and their tour mates sure knew how to light up the normally dank Echo. Here’s hoping it doesn’t take another decade for the rockers to make their L.A. return.