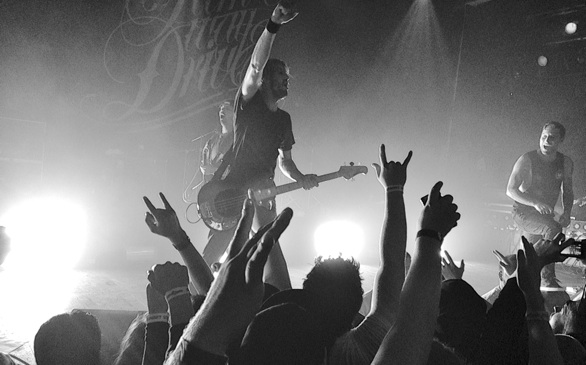 Hailing from the small, laid-back beach town of Byron Bay on Australia’s east coast, five-piece metalcore band Parkway Drive is anything but a day on the sand. And that’s not necessarily a bad thing, as its passionate, loud and heavy music is hardly meant for a Corona and a suntan.

The capacity crowd at the House of Blues was similarly passionate, loud and heavy. With a four-to-one guy-to-girl ratio, the floor was soaked in testosterone. By 11 p.m., it was soaked in sweat.

Saturday night's openers included local straight edge hardcore act Betrayal, whose relative young age belied its energy. Like most straight edge bands, Betrayal was angry with generally positive lyrics and a good message. Also like most hardcore bands, the message was lost in a sea of screaming.

Upon A Burning Body’s showmanship and Latino roots got the crowd’s blood going. While it's difficult to keep up with the various ‘core sub-genres, we were informed this band was deathcore. You can also call it heavy as f**k. The San Antonio five-piece has been around for a while, and you could tell it had some fans in the house despite the band members' theatrics and Hot Topic wardrobe.

Parkway Drive took to the stage around 9, instantly turning the packed house into one giant moving sea of black. If you were lucky to make it down to the floor, you were there for the remainder of the evening. You also took your fair share of body blows, and one writer's body was feeling the residual effects 48 hours later. But really, you don’t go to a show like this to twiddle your thumbs and play solitaire. The aforementioned testosterone was occasionally punctuated by an influx of courageous estrogen, though in traditional fashion, the pit was mainly dudes.

With nonstop stage diving, floating and, of course, moshing, it was clear this was a crowd stoked to see the guys. It’s also clear that by 10:30 on a Saturday night, this was not a sober crowd. Various overpriced PBR tall boys were seen flying from one end of the floor to another, drenching the crowd even more.

Parkway Drive has been around for nearly 10 years and has remained somewhat of an anomaly. Its heavy, metalcore sound has already had its five minutes of mainstream fame. However, only a few bands have stuck around and flourished like Parkway Drive.

The band's music is oddly addictive. Gimmick free and straightforward, the band hasn’t really evolved over the years. Instead, the band has mastered the art of working a crowd and giving them precisely what they want, a fact made most evident in the encore of fan-favorite "Carrion." The rest of its set list was impressively varied, ranging from oldies ("Romance Is Dead") to newer tracks ("Dark Days"),

So, as the sweaty, exhausted and smiling crowd spilled out onto Sunset Boulevard later that night, it was evident this was a varied group of different backgrounds and ethnicities who had just shared the one common experience that live music provides.