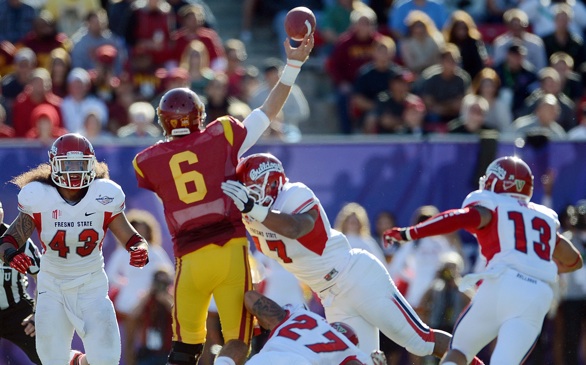 The NCAA is trying to pump the brakes on the breakneck pace of college football.

Pac-12 Conference football coaches on Wednesday blasted a proposed NCAA rules change that would grant defenses a 10-second window to substitute players before each snap. The proposal, in effect, would slow down the accelerating tempo of college offenses, which has become prevalent throughout the game in the last five years, and especially so in the Pac-12.

Under the proposed change, the offense that snaps the ball before the 40-second play clock hits 29 seconds would be assessed a 5-yard, delay-of-game penalty.

“So I hear the football rules committee wants to slow the game down and make you wait ten seconds to snap—and penalty is delay of game!” Arizona coach Rich Rodriguez tweeted Wednesday afternoon.

Air Force coach Troy Calhoun, chair of the 10-person NCAA Football Rules Committee, said the proposal was made with player safety in mind.

“As the average number of plays per game has increased, this issue has been discussed with greater frequency by the committee in recent years and we felt like it was time to act in the interests of protecting our student-athletes,” Calhoun said in a statement released on the NCAA website.

The NCAA did not release data on player safety related to the proposal.

Current rules do not guarantee a defense the opportunity to substitute unless the offense has substituted first.

An exception to the proposed rules change would be made in the final two minutes of each half.

The proposals would have to be approved by the NCAA Playing Rules Oversight Panel, which will review the proposal March 6. If approved, it would go into effect for the 2014 season.

“First off, doubt it will pass,” Washington State coach Mike Leach told ESPN.com. “Second, it’s ridiculous. All this tinkering is ridiculous. I think it deteriorates the game. It’s always been a game of creativity and strategy. So anytime someone doesn’t want to go back to the drawing board or rework their solutions to problems, they beg for a rule.”

“My suggestion is rather than spending a bunch of time coming up with a bunch of really stupid rules, spend that time coaching harder,” Leach said. “Worry about your own team and try to make your product better rather than trying to change the game so you don’t have to do anything.”