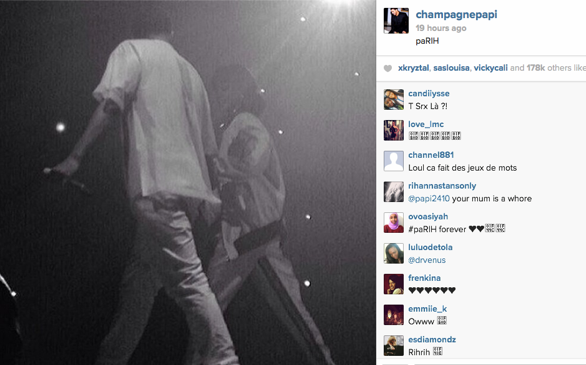 The duo sang 2011 hit "Take Care," and boy, there was some sexual tension going on!

As Drake rapped, he slowly walked towards the "Disturbia" singer, making eye contact as if he were serenading her. RiRi smiled bashfully at him like a girl with a crush, obviously flattered. The two were even slowly grinding against one other at one point.

After the duet, MTV reports Rihanna performed her club hit "Pour It Up."

It was rumored that she and Drake might've had a thing in the past, and Rihanna has been broken up with R&B superstar Chris Brown (who everyone knows did not get along with Drake, to say the least) for quite some time now. So, who knows -- will this performance spark rumors that RiRi and Drake are more than friends?

Do you think there is something going on between Drake and Rihanna?