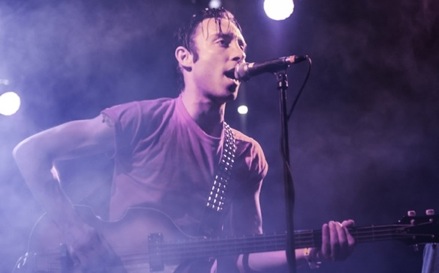 Punk rock trio the Coathangers kicked off he night with a sound reminiscent of a clash between the Distillers and the shrieking vocals of the Yeah Yeah Yeahs’ Karen O, tinged every now and then with some heavy metal growling.

The girls, all clad in black jeans and white band shirts, took the stage with beers in hand. They vehemently rocked their guitars and showcased melodic bass runs with heavy pounding on the drums. The Coathangers' vocal work is amusing, intense and even daunting at times.

By the time the Black Lips showed up, the venue was packed to capacity. Audience members were eager to see what the unruly quartet had up its sleeve.

The band opened up with “Family Tree," the vintage '60s-sounding tune from its previous album, Arabian Mountain (2011). As soon as the band played the first note, fans began flinging beers, creating a huge mosh pit as they crowd surfed and rushed the stage. Black Lips, now seven records into their career, seem to be focusing more on giving the audience a killer musical show rather than a spectacle of madness.

However, the band hasn’t been tamed. After all, it wouldn’t be a Black Lips show if guitarist Cole Alexander didn’t get on stage and continuously try to catch his own spit (and miss) and the crowd didn’t soak him in beer. Mid-set, Alexander hurled a full Coors Light can into the audience and added, “If you’re under 21, don’t drink it.”

The band continued to perform tracks from various albums, including the suggestive filth-caked ballad, “Dirty Hands” from Let it Bloom (2005), another crowd favorite. About three-quarters into the set, roadies began chucking toilet paper rolls into the audience, tee-pee'ing them and the venue.

Then, the band's high-energy hit “Bad Kids” came on, and the crowd went berzerk. Everyone had waited for it, and now their hair and clothes were soaked with sweat as their adrenaline flowed.

For the encore, Black Lips performed "Boys in the Wood,” a slower, Southern, rock-tinged track from their new album, Underneath The Rainbow, which managed to demonstrate the band's new-found versatility while preserving its garage rock roots.