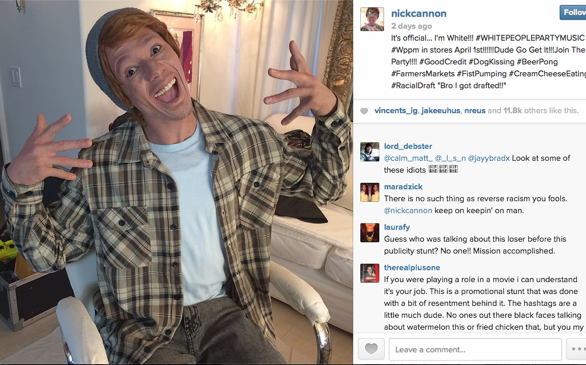 Nick Cannon recently upload a picture to Instagram of himself dressed in "white face," complete with white skin, reddish/blonde hair and "white boy" clothes. In the caption, he wrote, "It's official...I'm White!!!"

Now, Cannon is experiencing some backlash.

Immediately after he posted the photo, people began commenting on it, calling Cannon “a racist and a hypocrite.” However, others rallied behind Cannon to show their support and silence the haters.

It seems as if the rapper/actor/comedian is laughing off the haters, not caring whether or not people approve of his new marketing campaign. He recently took to Twitter and tweeted, “I love this conversation though. It’s showing a lot of people’s true colors... #punintended #wppm woooo!!!”

Cannon was also quoted saying in US Weekly, "You go to a party and white people are having more fun than anybody.’ They know how to have a good time! I could have named the album Purple People Party Music and you'd still get the same album, but it was just one of those things. You know, you deal with things like race, and people get uptight, so why not?"

What do you think about Nick Cannon's use of "white face?" Leave your comments below!