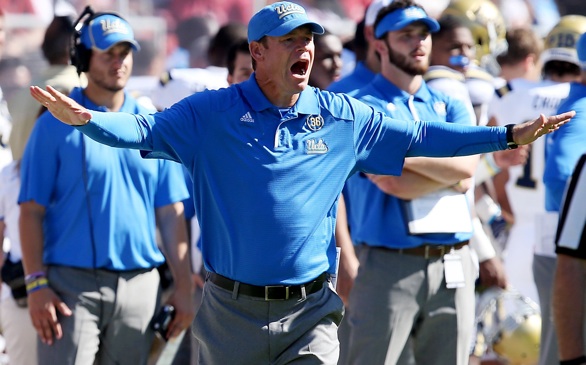 MOBILE -- On Thursday, it was the Pac-12 coaches' turn to chime in on the SEC’s decision to remain at eight conference games.

During a league conference call, multiple Pac-12 coaches voiced their displeasure with the SEC’s schedule.

Last week, the SEC voted to stick with an eight-game conference schedule. The Pac-12 and Big 12 already play nine conference games. The Big Ten is scheduled to begin a nine-game schedule in 2016.

The discussion centered around the fact that the Pac-12 coaches feel that there isn't a level playing field if every league doesn't play nine conference games.

UCLA coach Jim Mora was also outspoken about the issue.

“I would like to see everybody operate under the same set of rules or restrictions or regulations or whatever word you want to throw in there,” Mora said. “I think the Pac-12 is an incredibly competitive conference. I look at the teams that make up this conference and I think anybody can beat anybody on any given week. I think the same can be said for the SEC. And yet we play nine games against each other. I like that.

“I think we like that as a conference and I think we take pride in that because we’re interested in competing against the best week in and week out. We try not to schedule too many patsies.”

But Alabama coach Nick Saban said he doesn’t believe playing eight games is an advantage for the SEC. Saban was the only SEC coach who publicly supported the league moving to nine conference games.

“You all know that I was sort of an advocate of playing nine games and playing one more besides that from the so-called Big Five conferences so that we'd all have 10 games,” Saban said Thursday. “I think that I look at it from a fan perspective more than anything else.

“When it comes to strength of schedule and what has been done in the BCS to this point, the SEC usually ranks up there pretty well and it actually enhances our rating because the quality of teams that we have in our league and what people have done with their out-of-conference schedule."

But not all of the Pac-12 coaches saw it as a bad move by the SEC. Washington State coach Mike Leach seemed to applaud the SEC for its decision.

Visit The Anniston Star (Anniston, Ala.) at www.annistonstar.com