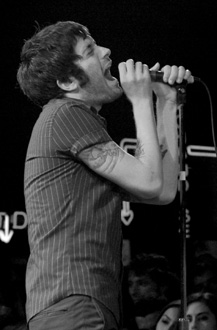 Untitled Document "Hollywood at night hanging around/If this is a must/then dying is a must right now." One could almost die from suffocation standing in the crowd at the jam-packed Roxy as "Young Hollywood" turned out en masse for the long-awaited return of Head Automatica to L.A. After the New York quartet had to cancel tour dates last Fall due to singer, Daryl Palumbo being treated for Crohn’s disease, fans were left aching for their next HA fix.

But, fans would have to wait quite a while before it was HA’s turn to take the stage after three distinctly different support acts opened the show.

Highlights of the youthfully energetic musings of Evaline were Richard Perry as he sang solo at the keyboard channeling of Conor Oberst and Steve Pedersen playing his bass with a violin bow. The set made me curious enough to grab a copy of their demo, produced by the Used’s Quinn Allman.

We are the Fury was up next. Musically there was nothing innovative or particularly horrible here. Vocalist Jeremy Lublin’s borderline Broadway show-like delivery put me off just a tad.

On the other hand, Morningwood’s Chantal Claret knocked several people’s socks off, literally. Two songs into their set, Claret pulled some girls onstage and proceeding to thrust her head into one’s cleavage. When not yelling lyrics over the band’s fun, danceable beats, Claret was shouting at bassist Pedro Yanowitz or at the crowd. At one point, to Claret’s encouragement and delight, a female fan jumped onstage to dance around, completely nude from the waist-up. The band’s "It’s tits!" slogan would forever be imprinted in this audience’s head.

Then, finally, it was time for HA. Palumbo declared, "What’s a girl like you doing in a place like this?" and kicked off the set with "At the Speed of a Yellow Bullet."

Larry Gorman’s pulsating drumbeats motivated everyone around me to move during "Brooklyn is Burning," while guitarist Craig Bonich mesmerized during "Disco Hades II."

The group performed several other tracks from their debut CD, Decadence, including "I Shot William H. Macy" and "Solid Gold Telephone." Palumbo introduced the album’s most popular song, "Beating Heart Baby," by saying, "Fuck this one."

Palumbo is full of so much charisma, your eyes can’t help but be glued to him. It’s mystifying how the same person can front an intense band like Glassjaw and a seemingly fun and carefree group like this one, until you actually see HA live. Palumbo seems like he’s having so much fun, transitioning from singing to screaming with such fluidity, you can’t help but get caught up in it.

No where was this more evident than during "Laughing at You," a new song from their upcoming Popaganda release. "Graduation Day," "Oxycotton," and the slower- tempoed "Scandalous" also made their L.A. debuts. HA also unveiled "K Horse" during an encore which featured a duet of "The Razor" with the Fury’s Lublin.

The band closed the evening with an instrumental outro during which Palumbo preached, "There are two types of people in this world, walkers and talkers." The frontman asked the crowd to think about this question as they left the show, "Are you the meat, or are you the butcher?" Maybe not as fun, but just definitely more impactful and thought-provoking as, "It’s tits."
Article posted on 2/13/2006
This article has been viewed 1482 times.