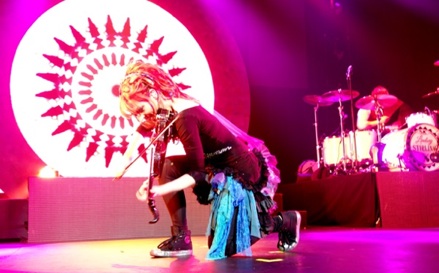 Lindsey Stirling is not one to hold back during her live performances!
(Credit: Linda De La Rosa)

An eclectic crowd filled with kids, their parents and couples in their teens, twenties, thirties and forties gathered at Club Nokia Thursday night to see electronic music maven Lindsey Stirling.

Originally from Arizona, Stirling is a classically trained violinist who brings electronic beats and animation to her craft. She garnered a ton of attention early on, receiving more than half a billion views on her YouTube channel.

Her self-titled debut album reached No. 1 on Billboard’s Dance/Electronic Chart and Classical Album Chart, and her sophomore release (Shatter Me) claimed the No. 2 spot on Billboard’s Top 200 album chart earlier this month.

So, after a long, blistering, hot day in L.A., fans’ faces lit up with excitement as they made their way into the dark, cool, air-conditioned venue to see the 27-year-old violinist perform. As the anticipation grew, excitement mounted. People were screaming, “We love you, Lindsey!” and “Please come on soon, Lindsey! It's a school night, and I have a test tomorrow!”

There was magic in the air when Stirling finally came out, dancing with her violin like a pixie princess. Her energy was infectious, and the love she has for performing is evident—she gave this reporter chills. Meanwhile, many in the crowd fixed their eyes on the stage as Stirling continued to dance and play her violin.

Although there was already a warm vibe in the air, Stirling suggested everyone in the venue say, “Hello” and introduce themselves to the person next them. The audience complied, and the atmosphere became noticeably friendlier.

Before going into the beautiful "Take Flight" (Shatter Me), Stirling encouraged the audience to never give up, to hold onto faith and beliefs and reach out to friends and family when things seem insurmountable.

Throughout the night, Stirling pulled off some impressive costume changes, and was accompanied by amazing visuals and backup dancers. It was a colorful feast for the eyes and ears as everyone on stage danced, and Stirling’s violin played on and on.