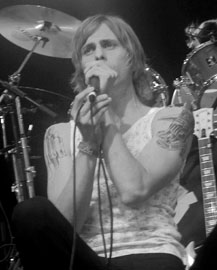 One thing that always impresses me about a band is when they play with the same passion in front of two hundred people as they do in front of two thousand. I have seen Home Town Hero perform from Spaceland to Coachella, and on this particular night they were no different, filling the beautifully renovated Sixteen-Fifty with abundant energy.

HTH had the crowd moving throughout their set of tracks from their newest CD, Bitch City — from Drew Stewart’s guitar intro of "Hi Lo," the pounding drums of Jamin Wilcox during "Hell of a Guy" and the buttery vocals of Aaron Bruno in "Working." HTH makes me wonder where exactly is the funk in the music of today?

The support acts for the night were all capable headliners in their own right. Jonathan Bates’s Mellowdrone mesmerized with a mix of electronic and modern rock sounds characterized by melodic hooks and driving beats. I felt transported to the ’60s while watching The Shore perform songs like "Hard Road." Zack Hexum opened the night with an irresistible blend of rock, pop and jazz sounds from his debut effort The Story So Far, captivating the crowd while alternately on vocals, saxophone, guitar or keyboard. Hexum artfully draws from influences from different times and genres while paving a road distinctly his own.

Reflecting back on all the performances of the night, I am reminded exactly where the funk is at — in the passion that all four acts shared with the crowd.