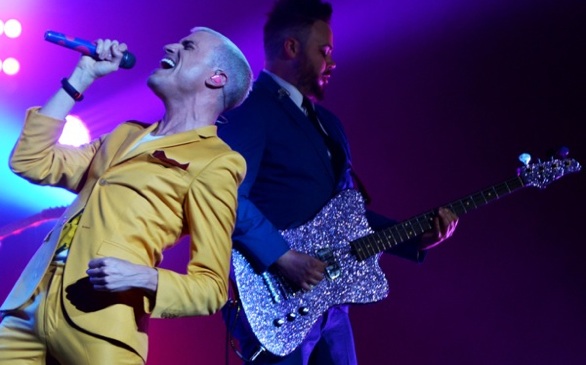 Hot off their third album release Pop Psychology, Neon Trees stormed into the Wiltern with one simple request: dance.

The four-piece act, fronted by singer Tyler Glenn, began its 19-song set list with "Lessons In Love (All Day, All Night) and a physical dance workout, which audiences across the general area and on the second tier level participated in.

Catchy riffs and contagious melodies fit perfectly with every chorus Glenn delivered. Without question, every person in attendance provided the most magnetic backing vocals for the band.

Although not in sequence, the album Pop Psychology was close to reaching a full-live performance, but the show lacked "Foolish Behavior" in its set list. However, popular singles and mainstream hits were also present, giving those who have been following the group for half a decade more than they could chew.

The constant themes of love and romance established a direct connection with the young audience, especially during Neon Trees' highly popular effort "Animal." Glenn’s interaction with the crowd between songs drew massive ovations, as he shed light and back-story descriptions about certain tracks.

As the lights went down and the band walked off stage, everyone present began chanting for an encore. Without much anticipation, a large pink brain descended from the rafters, and the band members reclaimed their positions.

Within the first guitar strums, time shifted 25 years back as Neon Trees covered The Pixies' "Where Is My Mind?" Many referenced the setting to Fight Club while others discovered the rock track for the first time.

The curtain call was "First Things First," and the band members took their bows, thanking everyone present.

Overall, Neon Trees proved to be a highly energetic band that must be enjoyed live.