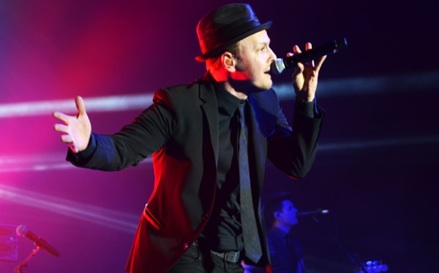 Many are under the impression New York-based artist Gavin DeGraw falls into the country genre, but after 90 minutes of him putting on a jam-packed performance at the Greek Theatre, it became obvious it's impossible to limit this performer to one genre. DeGraw embodies blues, soft rock and soul pop in his music.

Dressed in a black suit and tie, DeGraw began his show seducing the entire front row section by strutting along the edge of the stage and making eye contact with anyone at arms reach.

Taking a seat behind a grand piano, he sang passionately into the microphone for "Heartbreak" and "We Belong Together." The soft ballads had the audience at the edge of their seats, and DeGraw showed no signs of slowing down.

Switches were flipped into a harder rock direction during his cover of U2’s "Where The Streets Have No Name." DeGraw explored the entire stage with his band mates, standing next to guitarist Billy Norris while adding some air guitar in unison.

But the fan favorites, such as "Leading Man," set things in motion. And when DeGraw performed hit single "Chariot" from 2003 album Chariot, the crowd actively participated.

Seventeen songs completed the set list with an encore to rattle the audience. After a brief few moments, DeGraw and company returned with "Make A Move" and "Not Over You." Everyone clapped their hands to the beat as the night began to fade. DeGraw then selflessly took a bow before exiting the stage and expressing his gratitude.

Regardless of your personal musical taste, DeGraw is entertaining enough to keep you guessing. His music is extremely uplifting and passionate—nothing was left out during his Los Angeles performance.