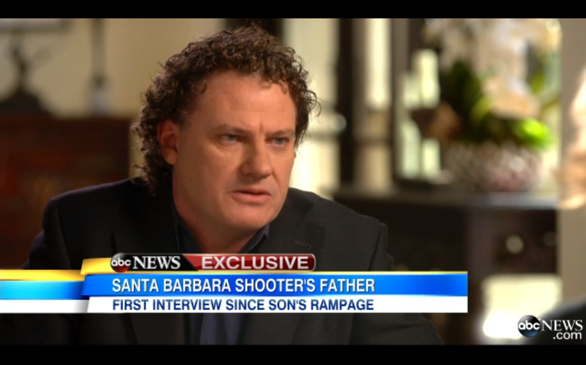 The interview many have been waiting for ever since Elliot Rodger wrecked havoc during a shooting rampage near UC Santa Barbara is airing Friday. Rodger's father, Peter Rodger, sat down with Barbara Walters and talked about his son.

"I wake up, and I think of those young men, young women, who have died and who were injured and were terrorized, and my son did that. My son caused so much pain and suffering for so many families,” Rodger said about his troubled son in the teaser.

Before the May 23 shooting, Elliot took to YouTube to complain about his non-existent sex life, blaming his loneliness on girls who refused him and the UCSB party life that excluded him. In a 137-page diatribe, he claimed retribution against the world, expressing his hatred towards women and the "popular" men those women dated.

Elliot carried out his threats by first killing three of his roommates and then hopping into his BMW, going on a killing spree in Isla Vista. He gunned down three UCSB students, one male and two females, and injured 13 others before committing suicide.

After the tragedy, many people wondered if there were warning signs: was there a way this could have been prevented? What about Elliot's parents -- they had to have known their son was capable of this, right?

"There was no way that I thought that this boy could hurt a flea," said Rodger. "What I don’t get is we didn’t see this coming at all.”

On June 1, Rodger had the chance to meet with one of Elliot's victim's, Christopher Michaels-Martinez, father. Richard Martinez told the New York Daily News, "I have met peter Peter Rodger, and we plan to work together so that other families such as ours will not suffer such as we have. This was a private conversation between grieving fathers who have reached common ground."

Although the conversation was private, photos of the two dads embracing one another are public.

Walters' interview with Rodger will air Friday at 10 p.m. on ABC.