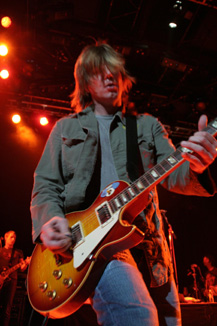 Much like finishing off a package of Oreos, the Goo Goo Dolls are rock’s favorite guilty pleasure. They entertained a sold-out, ready-to-party crowd that consisted of many 30-something women reminding their husbands just how cute singer John Rzeznik is. Though the band hasn’t released a new album in almost four years, their fans were still fully supportive and eager for any Goo they could get.

The band’s set was quite the variety of both old and even older songs, barely hinting at any of their upcoming album, slated to come out in April. "Better Days," a current staple on Top 40 radio, was the only remotely new song that the Goos played all night.

It was definitely a "best-of" show, highlighting the band’s career with all of the requisite hits. "Iris," "Slide," "Name" and "Here is Gone" were performed with the energy and excitement of brand new singles. Singing these overplayed songs with slight changes in their harmonies helped keep them sounding fresh and current.

Onstage chemistry between Rzeznik and bassist Robby Takac was undeniable. The two had a perfectly complementary relationship – Rzeznik played the part of the handsome and cool frontman, while Takac was the delightfully playful and energetic sidekick. Taking turns on lead vocals gave Rzeznik and Takac a chance to flirt with the audience on all sides of the stage.

Grungier and more rock and roll than the images in their videos, the Goos seemed comfortable. No glitz, glamour or tight leather pants; only memorable melodies, heartfelt lyrics and entertaining stage presences were needed for the band to win over everybody’s heart.

A three-song encore, including a cover of the optimistic "Give a Little Bit," wrapped up the show nicely. The music of the Goo Goo Dolls took listeners on an emotional roller coaster ride; misery, bitterness and regret were common themes, but ultimately, a genuine message of hope and good times was expressed. —Christina Johnson
Article posted on 2/21/2006
This article has been viewed 1219 times.