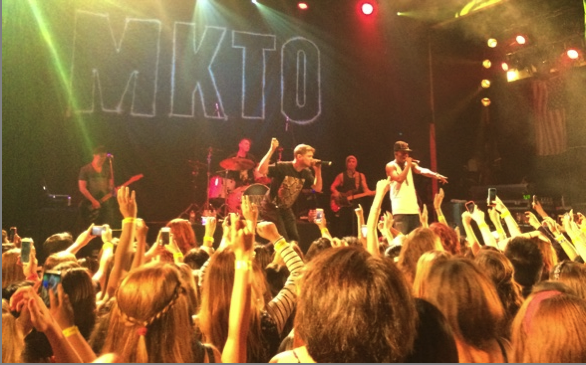 Friday night (July 11) at the House of Blues, a small crowd of teenyboppers took a break from their favorite malls and hangout spots to catch a glimpse of fairly new music duo, MKTO.

After surviving a long wait filled with painfully corny and over-exaggerated opening acts, the audience was quickly saved by MKTO’s energetic performance that even the adults in the room could enjoy.

Rapper Malcolm Kelley and singer Tony Oller, both wearing dark sunglasses, strolled onstage to hormonal teenage girls’ loud and shrill screams. The duo started out strong with its catchy upbeat songs “Could Be Me” and “Forever Until Tomorrow.” With excellent stage presence and enthusiasm that got everyone pumped, the guys kept the audience’s attention for most of the show.

However, the energy in the room quickly died down when MKTO proved to be unprepared for an acoustic version of a new song not on its self-titled debut album. Singing while reading the lyrics off a piece of paper that covered his face, Oller failed to keep the audience interested.

Luckily, the two quieted the side conversations and saved the show with their individual solo performances. Oller’s powerful, soulful voice filled the room as he sang, “Wasted,” while Kelley delivered a very strong performance of “Nowhere.”

The duo closed out the show with one of its popular songs, “Classic.” Nominated this year at the Radio Disney Awards as “Catchiest New Song,” this highly anticipated song received the loudest cheers of the night.

After leaving the stage for a brief moment, MKTO made its way back for an encore and performed an awkward version of Lorde’s “Royals.” Oller did a good job on the cover, but Kelley’s rap to the song was offbeat and out of place.

Finally, MKTO ended the concert strongly with its first single “Thank You” and bowed with a corny, synchronized jump off the drum stage.

Overall, with its young fan base, energetic stage presence and talent, MKTO is a music duo that pop lovers should definitely watch out for.