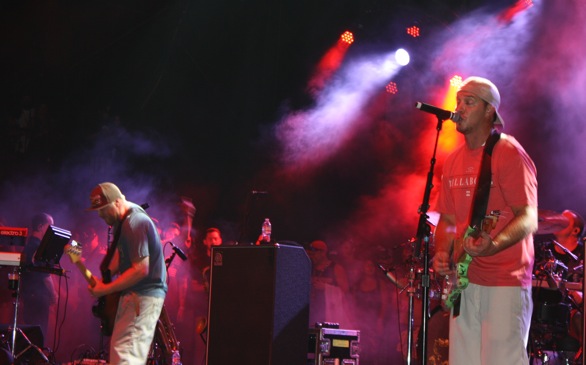 It was a day where everything went wrong, yet so right at the same time. Watching Slightly Stoopid perform at Irvine's smoke-filled Verizon Amphitheatre Saturday night (July 19) was quite the ending.

Cruising through its summer sessions tour, it was evident the reggae/funk/metal/hip-hop band was excited to return home to SoCal. To show it, the guys threw down a show like no other, even going so far to slipping in a few of their old punk rock hits.

Being from New York, my night started out a little off, not realizing how far Irvine was from downtown Los Angeles (well, now I know). Once my friend Connor and I arrived at the venue, a long walk into the amphitheater awaited. With Fishbone, Stephen Marley and NOFX on the lineup as well, the crowd could not have been more eclectic. Rowdy fans swayed back and forth on the pass, with beer overflowing from their glasses, and a massive party greeted everyone inside.

After enjoying the openers from our seats, I thought I'd give the photo pit a try for Slightly Stoopid, the night’s headliner. Now, 30 feet away from the band, I was in stoner heaven. The set and crowd atmosphere was unbelievable, as the band jammed out to classics—"Officer" and "Collie Man"—and the audience blazed accordingly.  When Slightly Stoopid's punk rock roots came out, pit circles overtook the crowd.

Coming from a punk rock background, Connor couldn’t resist the calling. Apparently, he proclaimed earlier that if another punk rock song was played, he was getting in the pit. I must have missed that, because when he bee-lined it for the circle, I was in complete shock (call it a cop out, but I chose not to follow suit to protect the precious DSLR).

As Connor bobbed and weaved through the circle, I watched and comically narrated the experience to myself. But then, a scary circle spill ensued when he fell. “Down goes Frazier, down goes Frazier!” I cheered, knowing that in the spirit of music, someone was there to pick him right back up.

Needless to say, Slightly Stoopid on Saturday was more than a night to remember. It might take a day or two to recover, but this band was more than worth it.