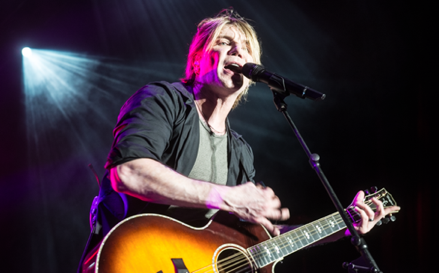 Summer shows at the Greek Theatre are always a blast, and last night the Goo Goo Dolls performed to a full house and a crowd of very energetic, smiling women.

The majority of the audience members were women who probably listened to “Iris” and “Slide” as their anthems in high school. But hey—summer nostalgia shows are great, and it seemed that the Goo Goo Dolls were having a blast being on stage as well (and it should be noted that these men look as though they haven’t aged at all over the years!).

The band ran out onto the stage to fans yelling, “Dizzy up the girl”—which is the title of the band’s 1998 album—and a number of people holding up signs. A few songs into the set, lead vocalist John Rzeznik pointed out one sign that read, “Johnny! A restraining order cannot stop my love!” He followed up with a comment wondering if it was funny or if he should be afraid (it sounded like he decided that he was experiencing a combination of the two).

Throughout the night the energy was high, with the audience cheering and singing along to every song, but Dizzy Up the Girl still seems to be the band’s greatest cheer-inducing album.

Playing a mix of new and old throughout their set, the Goo Goo Dolls finally reached near the end, closing the night with a bit romance with songs such as fan-favorite, “Iris.”

The band has been active since 1986 and has had countless chart-topping singles, making their show one of this year’s most highly anticipated summer concerts. The Goo Goo Dolls have been releasing new albums constantly, including Magnetic (June 2013), which has been well received.

Currently touring with the Plain White T’s and Daughtry, the band is continuing its North American tour through the end of August.