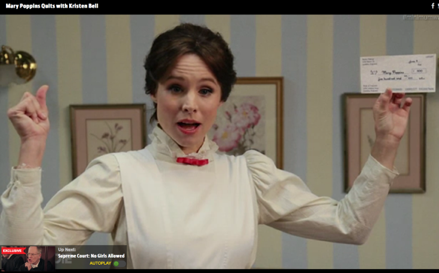 In a hilarious, smart parody, Frozen star Kristen Bell takes on the role of Mary Poppins—and she ain't happy about the current federal minimum wage.

Funny or Die's new skit features Bell, decked out to look strikingly similar to Julie Andrew's Mary Poppins, telling Jane and Michael she has to quit being their nanny because the pay is just too low.

Then, she breaks out into "Just a $3 Increase," a parody of the famous "Just a Spoonful of Sugar." She passionately sings that the federal minimum wage needs to increase from $7.25 an hour to $10.10, so she could survive and still be their nanny.

As the Chicago Tribune reports, the video skit refers to President Obama's goal of increasing the minimum wage. Republicans block the president's bill back in April, but come November, it will still be a hot issue at the congressional elections.