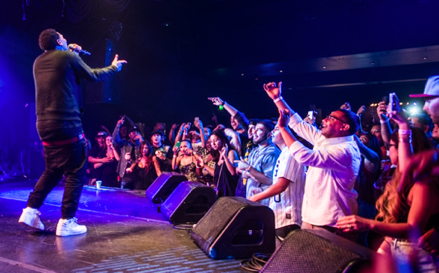 Thursday night, the Roxy Theater in Hollywood was pretty quiet for a hip-hop show. The reverb could be felt through the walls and the venue's floor, but the show felt more like an after party than an actual performance.

The audience waited, swaying and occasionally dancing to Dr. Dre over the speaker system, for headliner Kevin Gates to come to the stage. DJs warmed the crowd up by running raps over covers of “California Love,” and while some audience members loved it, others seemed to be thinking, “Don’t mess with the classics!”

When Gates made his way to the stage around 11 p.m., the performance gave off a “living room show” vibe.  It was intimate, and there was enough room to move around in the club, but his set had a strange, awkward tempo at the beginning of the night.

As he entered, Gates paused before filling in time with his recorded tracks. Overthrown by mumbles and a constant foghorn sound effect, the audience seemed to be a little confused by the rapper’s interactions.

However, a few songs in, Gates and his crew found their pace, and the audience got into the show, raising their arms and rapping their own versions to his beats. Even from outside you could hear the horn blasting—that’s how loud it was. From that point on, the guys kept the energy going throughout the night.

It was not a "normal" night out on the Sunset Strip by any means, but it was still a key show for any Gates fan. Once the pace was found, the audience chimed right in and kept the party going into the wee hours.