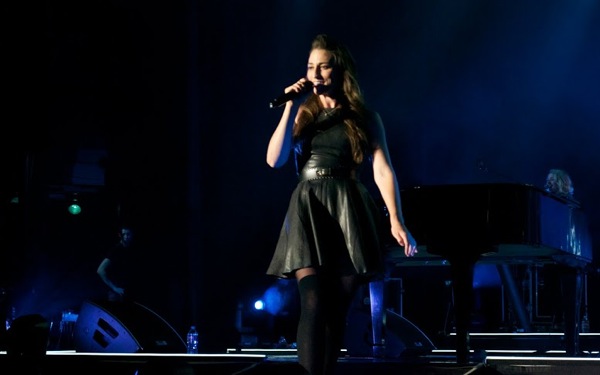 Monday night Sara Bareilles lit up the Greek Theatre with her soft vocals, quirky wit and an emotional dedication.

Bareilles began her set with the tour-titled track, “Little Black Dress.” Immediately the crowd got pumped up, standing as they swayed and sang along to the music.

The next big crowd pleaser was “Love Song,” the single from her 2007 debut album, Little Voice. Although even more people sang along to this number, the night’s biggest highlights were yet to come.

The one that pulled on many heartstrings was “Hercules,” which Bareilles dedicated to the late Robin Williams and his family after news broke earlier that day that the beloved comedian and actor had passed away.

Another highlight was “She Used to be Mine,” a song she wrote for the upcoming Broadway adaptation of the 2007 film, Waitress. Bareilles explained that this was the very first song she worked on for the musical and was very excited to share it with us.

Other crowd-pleasers included her cover of “Chandelier” by Sia, her emotional song “Gravity” and the more upbeat “Chasing the Sun,” which she jokingly introduced by saying that she wrote the song after a fan at a concert in Boston commented that her songs were great but were very depressing. “Chasing the Sun” was also dedicated to the couple that appeared in its music video, Matt and Chelsea.

Near the end of the show, Bareilles sang “King of Anything,” where she split the audience into two sides and assigned each side to sing the “Oh” and “Ah” parts of the song. She closed the night with her hit “Brave,” which she yet again dedicated to someone, this time being to her friend Lizzie Velasquez, the 25-year-old who was diagnosed with a rare syndrome that prevents her from gaining weight. As the crowd sang along, clips of people showing their bravery played in the background.

But the show didn’t quite end there. As fans began to walk towards the exit, Bareilles came back out with her musicians to sing a few choir songs. Once again, the crowd was mesmerized, keeping their eyes glued to the stage.

All in all, the night was a hit. Fans were hypnotized, and Bareilles never seemed to lose momentum, even during the more ballad-y songs. And no matter what, her funny asides never waned, keeping the summer atmosphere fun and light.