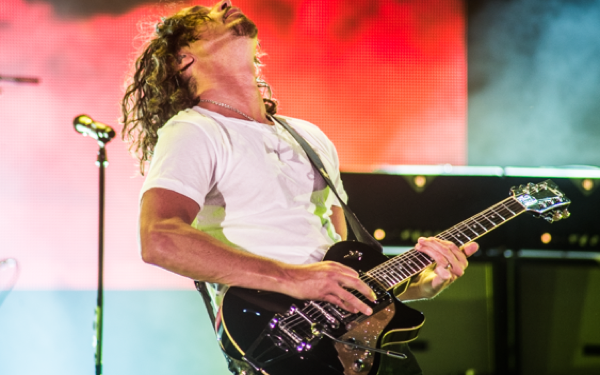 There was a massive party at the Hollywood Bowl Monday night during its dual headlining tour with bands Soundgarden and Nine Inch Nails.

The powerhouse bands drew a crowd of people that clearly grew up listening to their music. Most of the audience members ranged in their late 20’s to early 40’s, and most of them have probably been listening to NIN’s "Closer" since ‘94, when it was rebellious (And, I bet most of them still have it on their playlists as well).

Chris Cornell of Soundgarden never disappoints when he takes the stage. With a set beginning at 8 p.m., the band was on pretty early, but the guys still played to a packed house. People were dancing in the aisles and screaming for Cornell, who introduced himself as "Lance." Running through some of the album Superunknown (1994), including the popular "Black Hole Sun," Soundgarden hit all of the classics and the "political message" songs. These songs have remained entirely relevant over the years, and hopefully we’ll see the band out on tour again next year.

Up next was Nine Inch Nails. Leading man Trent Reznor took the band's dark themes and electronic explosions and turned the music into performance art. Backlit by moving screens and on-stage videos of Reznor, it was an energetic, sweaty and powerful set.

Toward the end of the night, Reznor took a very short break before NIN’s one-song encore that ended right before 11 p.m. "Hurt," a great number to finish out the night, gave each band member a moment to wave goodbye to the audience. That was when my one and only complaint came in: the show was too short. Most of the audience would have stayed for another hour, but they reluctantly made their way to the exits.

Monday night's show was one of the best performances I’ve seen in a long time. Separately, Soundgarden and Nine Inch Nails are powerful bands. Put them together for a headlining show, and you'll blow audiences away.