L.A.'s 2014 Budweiser Made in America Festival: A Huge Hit With Few Kinks to Work Out 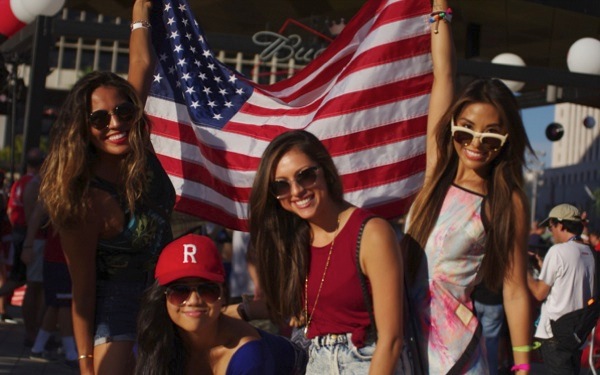 Festivalgoers at Budweiser's Made in America Festival.
(Credit: Zach Bourque)

This past Labor Day Weekend, downtown Los Angeles played host to Jay Z’s Budweiser Made in America festival in Grand Park, attracting an estimated 70,000 people throughout the weekend. With a mixture of hip-hop, EDM and rock, the thousands of fans danced from the afternoon into the night as acts such as Iggy Azalea, Kendrick Lamar, John Mayer, Juanes, Imagine Dragons and Kanye West blew them away. And with only a few arrests (17 total), the weekend went by smoothly for festivalgoers and law enforcement.

Still, as drama-free as it was, there were some bumps that should be worked out, so next year’s event will run even more smoothly—that is, if there is a MIA L.A. festival next year.

THE FESTIVAL
Layout
The 12-acre space that spread from the Music Center to City Hall felt bigger than 12 acres at moments, especially under the blazing sun (thankfully, there were water refill stations). In fact, it felt more like one giant block party than an actual music festival.

Quickly, people realized that walking from one of the main stages (Dylan or Marilyn Stages) to the bathroom or food trucks would be a mission, as there were multiple stairs one had to climb to get to either. Too many times I heard someone complain about how far the bathrooms were, and there was some confusion during Day One about which stage was which. In the future, maps would be very helpful.

Other than the fact that the festival was very large and sometimes hard to navigate, the layout worked out well regarding the sound system. No matter where you were, you could hear whoever was performing on stage. For example, if you didn’t want to be stuck among the overly sweaty people grinding to Kanye, you could make the trek up to the food trucks and dance in middle of the street...which I did shamelessly.

The Food
Speaking of food, the large of variety of food trucks ensured that there was something for everbody. It was just too bad (and a little annoying) that the lines were so long at every single truck.

Beer Garden
Thank GOD for the Budweiser beer garden! It was like a heavenly oasis in the middle of a desert for the 21-and-over crowd.

When the heat became too much and alcohol became a necessity, the beer garden (which exclusively sold Budweiser beer, of course) was a nice escape. Tired festivalgoers would flock to the garden, spread out their blankets, pop a squat and sip on a cold brewski. The garden never got too crowded, so there was always a place to sit. The only downside: near the end of day on Saturday, the garden sort of resembled a dirty frat house, with too many empty cups on the ground and overflowing trashcans.

Security
As stated before, there were only 17 reported arrests, which indicates security and law enforcement officials were on top of their game. With that being said, I will say that security was pretty easygoing both days, in the beer garden especially. Besides drinking, people treated themselves to a few hits of weed. Puffs of marijuana smoke could be seen sporadically throughout the garden, as people sat in circles and passed a joint around. And some even felt brave enough to take their joints, blunts and pipes near the stages, smoking and dancing to YG, Weezer and Chance the Rapper. Apparently, security and officials had their eyes on bigger issues, which I'm sure the smoking crowd appreciated.

THE CROWD
Being the first MIA festival in L.A., no one really knew what kind of crowd would gather in downtown, especially because the festival was so eclectic, with EDM, rock and hip-hop acts. Much to my relief, MIA didn't attract “typical” music festival or rave goers; everybody was laid back and dressed simply. Clearly, they were there for the music and not so much to make a fashion statement.

Girls and guys donned tanks, shorts, tennis shoes (some flip-flops) and a lot of red, white and blue-themed clothing. Thankfully, the Native American headdresses and nipple pasties were left at home.

The vibe throughout the weekend was “chill,” with people making new friends over a beer (or joint) and sharing the limited amount of space closer to the stages. With a mixture of races and ages, it was nice to see how big of a melting pot L.A. really is.

THE MUSIC
Ahhh, the music—by far the best part of this festival and worth the ticket price.

Day One
Saturday’s standouts definitely included Hit-Boy and YG, who both got the party going earlier in the day on the Dylan Stage.

However, sultry songstress ZZ Ward opened the Marilyn Stage at 2 p.m. on with a soulful set that had many in the crowd bobbing their heads and clapping their hands. Dressed in a funky turquoise/orange-splattered shorts and matching jacket (which she later told us was designed by Vivienne Westwood), a black hat on top of her blonde hair and black booties, the 28-year-old showed off her swag that caught the attention of many as she performed “365 Days” and other hits.

“Yeah, I want her to take her jacket off!” said a girl.

When we caught up with the singer (who was born Zsuzsanna Eva Ward) after her set, she told us, “I don’t really see myself as a sex symbol, but maybe ‘ZZ Ward’ is.” She added that when it comes to her style, she likes to embrace both the masculinity and femininity. “If I can be strong and sexy, that’s great,” she said.

Later that afternoon, Iggy Azalea killed it on stage, especially when Rita Ora joined her for “Black Widow.”

Still, nobody could quite compete with rapper Kendrick Lamar. When Lamar performed, the vibe changed. People became even friendlier as strangers danced and grooved with one another. Imagine Dragons came on after Lamar, but the L.A. native was the real closer Saturday night for this reviewer.

Day Two
On Sunday, SZA and Rita Ora stood out earlier in the day, but it wasn’t until around 5 p.m. that the party really started with Nipsey Hussle, Weezer and Chance the Rapper.

Colombian singer Juanes was a surprise hit among the crowd. Although it was clear many fans didn’t understand Spanish, his energy was infectious, and it was impossible to not dance to his lyrics.

Afterwards, John Mayer took the stage, looking adorable in black glasses and a vintage white tee with a black cat on the front. He sang “No Such Thing,” “Slow Dancing in a Burning Room” and “Gravity,” but when he launched into an acoustic cover of Beyoncé’s “XO,” I’m sure he gained even more fans: this cover was beautiful and had the crowd singing back.

And then, finally, people got what they were waiting for: Kanye West, who at first appeared as a silhouette and then emerged on stage with a mask that covered his face. Of course, he got the crowd hyped with old favorites such as “I Don’t Like” and “Clique” as well as newer hits, like “Black Skinhead” and “Mercy.” West went over his allotted time, ending at about 11:30 p.m., and the crowd couldn’t have been happier. Say what you want about the man, but he’s a talented performer who was the perfect ending to a pretty perfect music festival.

From a festivalgoer's standpoint, Made in America was a hit. Despite the heat and large layout, it brought together a variety of people who all had one thing in common: a love for music. Let's just hope MIA will return next year and the year after that...

Live Show Reviews
Beyoncé’s Coachella performance was incredible — and she knew it
2,733 views