Her Name is BANKS and She's a Goddess On Our Radar 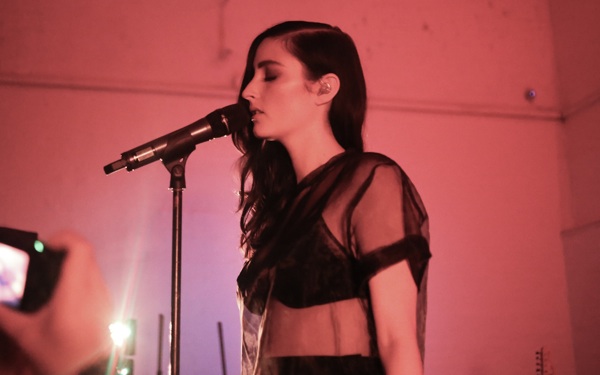 Rising star Jillian Rose Banks—better known as just BANKS—graced the stage at Sonos Studios Saturday, Sept. 13 with KCRW’s Jason Bentley interviewing her regarding her new album, Goddess, which was released earlier this month.

Standing in the audience a couple of feet away from her, the singer-songwriter blew me away when she said, “Everybody feels weak sometimes, fragile sometimes, strong sometimes, insecure sometimes, sexy as f*ck sometimes, and it’s so human to be a Goddess, and to be Goddess is to be human.”

BANKS’ onstage presence was raw and unscripted; her reaction to the crowd was genuine and heartfelt. She allowed all of us present in that room to take a glimpse into her creativity.

“When a friend that I really care about is going through something that sparks my creativity and makes me want to write,” she shared.

A great artist is one that you can relate to. You listen to their songs and know that this person captured all your emotions, turned them into lyrics and released it as a track. BANKS does just that throughout Goddess. Listening to her album, you know all of the songs chosen are close to her heart; they are sung with real emotion and consume the listener.

On Goddess, you notice a nice flow from song to song. The lyrics and vocals are front and center, but BANKS said, “There is a different heartbeat and soul to every song.”

Bentley asked, “Have you ever talked about the song with the person that it is about?” BANKS replied, “I write when I don’t know how to talk. I write when I’m upset, and often times the people that I write about know me well enough to know why I write.”

Her two songs “Someone New” and “You Should Know Where I’m Coming From” reflect that sentiment perfectly.

BANKS revealed the hardest part about releasing her album was cutting out some songs. However, the ones that were chosen “all touch upon my layers that I wanted to touch upon—my spicy parts, my fragile parts.”

Producers Lil Silva, Totally Enormous Extinct Dinosaurs and Sohn worked with BANKS and when asked about how her experience was collaborating with them, the songstress replied, “I am so me, nothing I ever do is never going to sound like me. There’s always going to be one string connecting everyone I work with, and that’s me and my lyrics.”