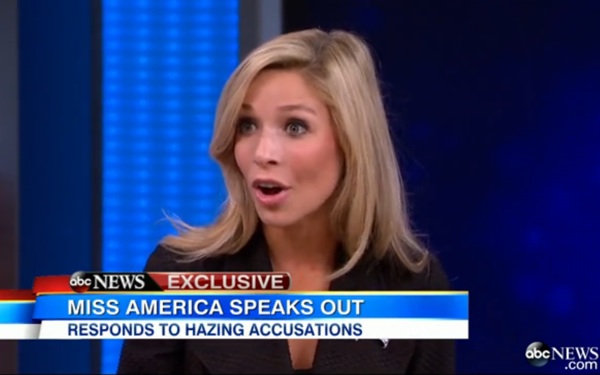 On Monday, the news site Jezebel ran a story alleging Miss America winner Kira Kazantsev was kicked out her sorority for "abusive hazing" while at Hofstra University.

The allegations in the Jezebel article come from anonymous sources and a "tipster close to Kazantsev" who says the beauty queen made Alpha Phi pledges' lives a "living hell." Kazantsev and her friend were even accused of making pledges "perform physical tasks to the point of bruising and exhaustion."

However, Kazantsev recently told "Good Morning America" that the story was blown out of proportion.

"These allegations are just not true," said Kazantsev. "I'm incredibly hurt that someone has said these things."

But, she admitted she was part of the hazing culture that required pledges to recite information, endure a few sleepless nights crafting and other "menial" tasks.

"Under the broad definition of hazing, yes -- I was involved with some of the activities while I was at Hofstra," said Kazantsev. "Everybody wants to be a part of something, and at the time, unfortunately, that was just the culture of the university."

Kazantsev also admitted that she was in fact hazed.

So, why exactly did she get kicked out of Alpha Phi? She claims it was because of a bad joke she sent in an email that was taken out of context and forwarded to the national office.

The joke was "that we would make the evening scary for the pledges. That never came to fruition. None of those things that I've been accused of ever happened or were ever intended to happen."

"Now that this is all out in the open, I think it's very important for me to address it. I'm going to take this negative and turn it into a positive."

Blog
How not to get arrested on campus
1,483 views

Blog
What are shade balls and do how they help save Los Angeles' water?
1,782 views

Blog
Young SoCal couple struck by lightning -- and hand-holding may have saved their lives
1,524 views
bid=||