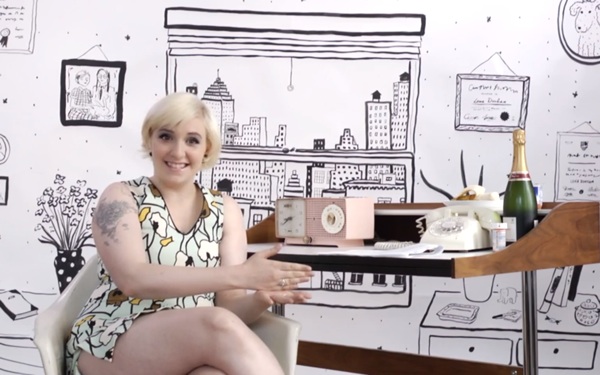 When I tell people I'm only interested in dating "nice" guys, they think I'm full of sh*t. They launch into the "Nice-guys-always-finish-last" argument or say, "Girls are always lying when they say they want a 'nice' guy."

For some women, that may be true (as we're about to see), but actress/writer Lena Dunham ("Girls") has accurately explained why that is and why ladies should like 'nice' guys.

Promoting her upcoming book Not That Kind of Girl (due out Sept. 30), Dunham has taken to YouTube, posting videos of herself answering people's questions about sex, friendships, love, etc. The video series is called "ASK LENA."

One person wrote her:

I'm in college, and I have this bad habit of continuously sleeping with guys who treat me horribly...

Oh, honey. You're not the only one.

Like literally, the meaner they are, the more I run back to them. I just can't stand guys who are nice to me; it's just such a turnoff. How do I break this vicious cycle?

Dunham breaks it down for her. "I can't tell you how much I understand," she says. "Before my current boyfriend--who is a lovely, lovely person--I had a train of the most disastrous, despicable, van-dwelling monsters in my bed, in my life."

Oh? This is news.

She continues, "You have to love YOURSELF to love someone who's going to love YOU."

Okay...let's take a moment to digest that, because it is 100 percent true.

Dunham further explains, "An attraction to 'nice' people is truly something that comes when you have an attraction to yourself. When you feel a lot of negativity towards yourself, you're almost sexually attracted to people who are going to reflect that back into you. When you learn to love and appreciate those qualities that you've tried so hard to suppress, suddenly that behavior is not going to be charming to you anymore."

BOOM. Definitely couldn't have explained it better myself.

"I just know that that's true because I've been there."

Sex & Relationships
The strange reasons why millennials are having less sex than their parents
2,561 views

Sex & Relationships
5 ways to get closure — without talking to your ex
2,592 views

Sex & Relationships
Why you should go on a second date (even if there was no spark)
2,077 views

Sex & Relationships
Is being ‘emotionally unavailable’ holding you back?
2,299 views