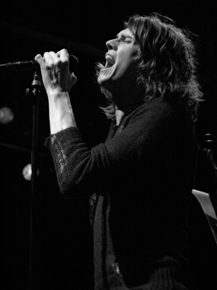 Leave it to indie-pop-emo kids the Academy Is to bring out all there is to love and hate about music in one night, but more on that later.

First, lovable geeks Hellogoodbye took the stage at the very sold-out show, showing early-on the necessity of a sense of humor this night. Paris Hilton, Beyonce and even wise Yoda himself appeared with the band … granted in cardboard cutout form, but who’s keeping track? Fun, likeable and pretense-free, the band made for easy listening.

Their only shortcoming was in the band members’ ability to be interactive with their audience. Focusing more on their playing than anything else, it would have been nice to see the guys have more fun with each other and the crowd while performing, as cardboard Paris can’t be a substitute.

Easily the most un-scene band on the tour, Acceptance then showed that it’s not necessary to conform to popular passing trends to make good, solid rock. Sticking to songs off their major-label debut from last year, Phantoms, the band got a surprising amount of positive feedback from the audience. Considering the vast majority of kids in attendance were only there either for Panic! or Academy, Acceptance still rocked valiantly, getting the "too cool for you" crowd moving with opening song "In Too Far" and older fan-favorite "Permanent."

Displaying by far the most cohesive musicianship of any band on the bill, with the most ease and comfort on stage with each other, it’s a shame Acceptance didn’t get to show the full spectrum of its ability. While it slowed for the all too sing-along-able "So Contagious," there wasn’t enough time in the band’s set to do it full justice. Unlike certain bands on the tour, for whom you hear one song and you’ve basically heard them all, Acceptance can pride itself on a varied and engaging musical repertoire to build a set list from. Hopefully, more than a few kids walked away from this show realizing the same.

Final opening act Panic! at the Disco displayed decently solid musicianship, but had that same flair for showmanship that the Academy Is frontman William Beckett already claimed some time ago.

The band could easily have longevity and be more than a fleeting TRL flash-in-the-pan, if its members just stopped acting like caricatures of themselves on stage. While the suits and ties thing works to some bands’ advantage, the costumes and bravado only serve to make the very teenaged Panic! seem like they’re not relatable.

The Academy Is, on the other hand, is the perfect example of charisma that doesn’t go too far into the territory of cockiness. Confident, but not too much so, Academy has paid its dues enough to warrant building itself up a bit anyway.

As the band took stage, there was a deafening cry of teen girls collectively soiling themselves but the band handled it as professionals, continuing to play as girls screamed for Beckett to do unprintable things to them.

Opening with "Attention," the band members demanded just that from the second they walked out. Challenging his audience for more energy as his wiry frame swaggered across the stage, Beckett showed why he is the current bar for all up and coming frontmen to surpass. Playing songs off last year’s release, Almost Here, the rest of the band, with the exception of bassist Adam Siska, unfortunately seemed content to hide behind their respective instruments and shaggy hair.

To be fair though, Beckett could rub against anyone or anything on stage and make it look sexual, something that is likely hard to compete with when vying for the spotlight.

And as a side note, the Academy Is has so much talent among its members, it’s just a shame some of their fans don’t have more class. If these are the biggest problems plaguing the band, though, they deserve all the hype and attention they already get, and more.
Article posted on 3/7/2006
This article has been viewed 1171 times.