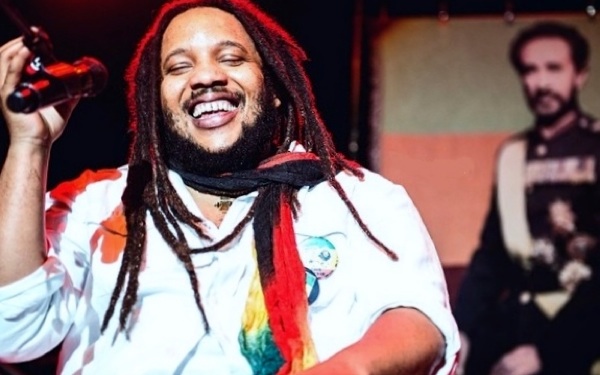 Just as the venue began to take in the Jo’s youthful energy, his father (Stephen) joined him, and they both took the party to the next level in true reggae style.

Beginning with Stephen's father, Bob Marley’s, song, “Punky Reggae Party,” the band then transitioned to “Hey Baby,” “Traffic Jam,” “Iron Bars,” “Chase Dem" and “Can’t Keep I Down" from his 2007 Grammy winning album Mind Control. Stephen then followed with “Break Us Apart” from his 2011 The Revelation Pt. 1: The Root of Life.  Hits “No Cigarette” and “Pale Moonlight” continued to set the mood of positive vibes, as Stephen belted out more tunes from his signature lion head guitar. He effortlessly connected with the audience with the passion of his father’s legacy, performing Bob’s best classics such as “Could You Be Loved” and “Get Up Stand Up." The band’s powerful energy kept the crowd jumping and dancing throughout the whole set as everyone sang along.

The last song of the set was “One Love.”  Calm and inspiration filled the air along with acoustic vibes very reminiscent of Bob Marley's performances. As the second, third and even fourth generations of Marley came on stage singing, dancing and jumping about, an air of unity and love seemed to fill the audience.  Then, as all around were hopping up and down in unison, the impressive and memorable encore came to an end.

After a 20-minute intermission, the crowd was ready and pumped for the headliners. At 8:45 p.m. congas began to echo throughout the venue, letting everyone know the most important performance was beginning.

The group, 20 years in the making, opened its set with flashback features that included sitar, guitar, bass, drums and percussion instruments. The politically and humanitarian-inspired group, which has sold out shows internationally and over 1.2 million records worldwide, played music from its most recent album Saudade, as well as an energetic line up of reggae, dub, hip-hop, jazz and Latin grooves.

Setting the stage for what was to come, bassist Ashish Vyas jumped into the crowd, and the 15-band of musicians and vocalists launched a playful and intense energy that can only be fully understood in person.  Next, rapper Mr. Lif delivered verses from the 2011 Culture of Fear album, while DJs Rob Garza and Eric Hilton rotated about, backing the band on percussions and sometimes strings.

The set list was sure to please, creating a party atmosphere that commanded the stage and audience.  Diverse and interchanging, vocalists enchanted the crowd with Rasta calls, seduction, punk, funk, psychedelic space rock and subliminal political innuendos. Newbie artist Lou Lou was a sight to see and hear as the audience absorbed the infusion of her smooth and sexy sounds. Many couldn’t resist dancing, bobbing their heads and jumping up and down.

Nearing the end of the set, the veteran trip hop musicians paid tribute to L.A. and in honor covered The Doors’ “Strange Days.”  Pushing boundaries, they also played the politically charged song “Vampire,” which denounces the International Monetary Fund (IMF). Just when the crowd of concertgoers thought the finale was coming, the musicians simply turned down the set and ended the epic show with a simple bow.