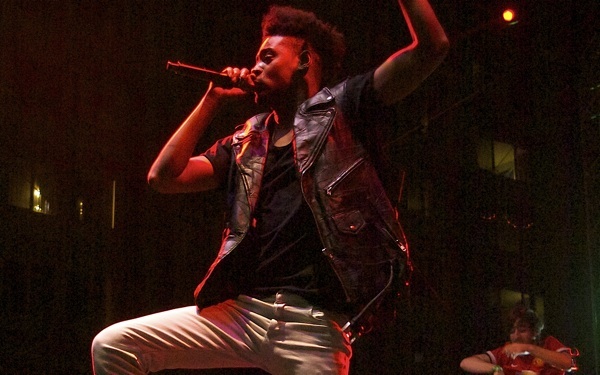 A typical L.A. Sunday "Funday" might include brunch, a movie or a relaxing on the beach followed by a little wine and Netflix on the couch. Surely, a jam-packed hip-hop concert is not on the schedule…right?

Well, it was for those who went to Fool’s Gold Day Off Sunday at the Shrine Auditorium and Expo Hall next to USC.

The Shrine was the perfect place to host the concert, and the venue wasn’t overly crowded—there were definitely people there, but not enough to make the space feel packed or create long lines at the bar. But with that being said, Fool’s Gold made two critical errors when planning this show.

The first was scheduling it on a Sunday. This was a Saturday show by all stretches of the imagination, and trying to make it happen on a Sunday was like fitting a round peg into a square hole. Everyone had work or school the next day, and a noticeable number of people left before headliner Danny Brown had a chance to go on.

The second was not attracting a bigger concentration of USC students. I expected to see a lot more of the ‘SC crowd around—frat bros and sorority gals, maybe donning some Trojan or Greek gear—but that just wasn't the case at all. Maybe everyone was beat from the football game the day before, or perhaps Fool’s Gold just doesn't connect with that demographic.

Now, on a brighter note: those who did attend were diehard hip-hop aficionados who really knew what the hell they were talking about. And, they knew exactly why they were there. Fool’s Gold focuses on next-level hip-hop, and perhaps that's why it doesn't resonate with a bigger audience like some other labels. A-Trak brought up a slew of rappers that no one had heard of...but why? Because they were f*cking legit. And that's what this show was all about.

A-Trak’s set emanated a general ethos of genuine rap during the afternoon. Under a setting sun, wearing what looked like a skirt under a leather jacket—and before he brought out his new MC sideshow—the DJ dropped a set that was roughly 80 percent hip-hop and 20 percent "hype" music. It was glorious. Judging from what I experienced during his special guest appearance at the Mad Decent Block Party a few weeks prior, I was expecting a caveman-esque crap train. Thankfully, that wasn’t the case.

His set did drag on, though. Technically, it wasn’t even A-Trak’s set by the time the whole thing was over. Rapper after rapper came out to make an appearance, each one promising that Brown would come out soon. But about an hour later, we were still watching guest rappers.

That segment of the show ended with a performance from Fredo Santana, who was actually a standout of the day. However, by the time his set had wrapped, it was already feeling like it was getting late. The bars were closing, and people were going home.

Still, Fredo is talented, and a lot of people stayed for him. And again, the people that stuck around were those that actually knew hip-hop. Cats were getting DOWN as Fredo dropped raps, and despite having school or work the next day (or God forbid both?), these fans were turning up.

Finally, Brown took the stage, and his set was unbelievable—seriously, this guy is a pro now. After a few years of touring, he has smoothed out the rough edges in his set, and he comes off as a true performer. He opened his set with a few of the recent standards, like “Dope Song” and “Smokin & Drinkin,” but the show really got hyped up when Brown dropped his new track with Rustie titled "Attak." That song is just relentless, and it set the stage for A-Trak to reappear and help close Brown’s set on a solid note.

Brown has come a long way in recent years. Starting out as a potty-mouth shock jock MC, his set has more of a cadence to it than it used to. With undeniable success from his last two records, you could expect that he would either improve upon his act or use the said success as an excuse to slack off. Brown most definitely embraced the former, because the guy really does have his sh*t together when performing live.

Make no mistake, Fool's Gold Day Off was a success. The crowd might have been a bit thin, but there were still enough people there to make the thing happen. For sake of argument, we can compare Fool’s Gold Day Off to the Mad Decent Block Party; the two shows were essentially the same thing except Fool’s Gold is more rap-oriented.

While Mad Decent put on a show that was centrally located, held on a Saturday and featured an A-list set of artists that you have already heard too much of, Fool’s Gold was located right by a Metro station, had ample bar space, and its lineup included a collection of A-list rappers that you probably haven't heard of. Fool's Gold embraces next-level hip-hop, giving the aficionados what they love and educating those who are not as well-versed, which is greatly appreciated.