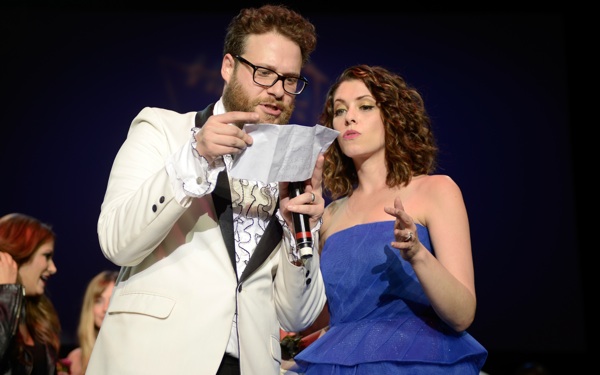 Seth Rogen and Lauren Miller Rogen’s annual Hilarity for Charity Variety Show entered its third year at the Hollywood Palladium Friday night to continue raising money and spreading awareness for Alzheimer’s. This year, the event raised more than $900,000 to benefit the Alzheimer's Association.

The venue was transformed into a high school auditorium, resembling a ’80 prom with a huge disco ball and colorful streamers falling from the ceiling. Lockers, posters and banners adorned the halls, and guests were treated to nostalgic treats such as beer nuts, caramel and white cheddar popcorn, soft pretzel bites and homemade Twinkies.

The star-studded line-up was there not only to entertain but to also continue raising money for the cause. Kicking off the night was Craig Robinson and The Nasty Delicious, which led into Rogen’s own comedy routine. Rogen pulled an unsuspecting audience member on stage to perform a skit that morphed from them acting out the comedian’s attempt to buy a pet elephant into them confessing their love for each other.

The laughs continued with “Silicon Valley” star Kumail Nanjiani, who performed a short routine that covered topics from religion to his parent’s false hope that he will still become a doctor. Weird Al Yankovic followed suit to pump up the audience by singing a song off his new album Mandatory Fun, and in some instances, he got off stage and sang directly into audience members’ faces.

Since the theme was ‘80s prom, it was only right to pick a prom king and queen and have them sit upon their thrones on stage. So, Rogen tried to convince people to bid on the seats, claiming those who sat on stage would be close to “Sarah Silverman’s and Joseph Gordon-Levitt’s butts.” His smooth talking clearly worked as a couple bid $3,800 thousand for the prime seats.

“America’s Got Talent” finalists and magicians David and Leeman added another level to the event by bringing magic to the room but in a funny way. When Silverman graced the stage soon after, the room erupted into applause, everyone waiting to hear what obscene jokes she would bring to a comedy event. And she did not disappoint, with her crude humor that—despite the subject matter touching on religion, charity and sex—left the room in hysterics.

The highly anticipated Gordon-Levitt rocked out on stage to No Doubt’s “Just A Girl” and midway broke off to talk about a gender issue he had come across. Still, he made sure to finish the song before exiting.

Even with all of the laughs, magic and music, the purpose of the event was not forgotten. Seth's wife and actress Lauren Miller Rogen (For a Good Time, Call...) discussed her personal connection to Alzheimer’s: her mother is diagnosed with the disease.

“My mom, Adele, would have loved tonight,” she said. “She and I would have gone shopping for a dress together. But, unfortunately she’s not here tonight. She’s at home, 63-years-old and eight years into her diagnosis with early onset Alzheimer’s. I know that tonight is a night for laughter, but just for a moment, I’d like to remind you why we are here.”

Miller Rogen also broke down where the money raised will go, explaining it will help fund research and provide grants for families to care for their loved ones who have been diagnosed with the disease. She showed the effectiveness of the events, explaining that they had already raised more than $800,000 before the auctioning happened.

The night concluded with the last of the auctions, Bill Burr’s comedy routine that was funny in almost an awkward way and Bell Biv DeVoe, who got everyone on their feet and dancing – just like every prom should be.