Fences Sways the Crowd with Bittersweet Tunes at The Roxy 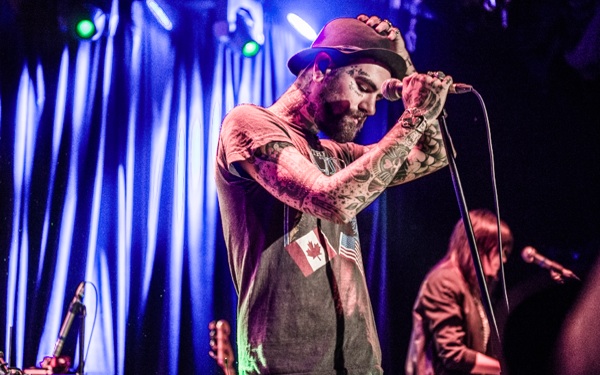 It seems the hipsters are making their way to the Sunset Strip nearly every night, and Tuesday night was no exception. Indie rock band Fences lured them out in droves at Bear Hands’ headlining show at the Roxy Theatre. The venue was packed with many fans that knew the words and sang along to a few of Fences' songs, but it’s safe to say the band reeled in new fans after it finished its set.

As the opening band for Bear Hands, Fences started off the night with “Songs About Angels” and maintained an alternative, rock-moody vibe. With lead singer Christopher Mansfield on lead vocals and Lindsey Starr providing back up, these singers offer a lovely dimension to the genre. Their songs have a bittersweet, melancholic tone, as they sing about pain, lost love and heartbreak. Add Benjamin Greenspan on guitar/keys and Elliott Garm Chaffee on drums, and you get one kickass group of musicians.

After “Songs About Angels,” the band continued down its set list, performing “Dusty Beds,” “Dogs at the Table,” “The Lake,” “Sunburns” and others. The band, of course, performed its hit song featuring Macklemore and Ryan Lewis, “Arrows.”

“He’s not here,” said Mansfield, referring to Macklemore. But it didn’t matter; the song didn’t suffer without the Grammy Award-winning duo present.

Throughout the performance, Mansfield interacted and engaged the crowd, blurting out whatever random thought was on his mind. Early in the set, he stopped and said, “I’m in an awkward mood. I’ll say awkward things. I had a pancake for breakfast. The guy running sound made me a pancake.” Not the usual band banter, but who doesn’t like a pancake breakfast from a sound guy?

While taking a minute to thank the audience for coming out, Mansfield also pointed out that the band’s drummer had family in the crowd. Though the band is based out of Seattle, Wash., the show still, in a way, had an intimate, family hometown atmosphere.

It's been too long since the band played Los Angeles, and they came back with a bang. When I last saw them, it was at The Fonda, also in Hollywood. The venues are very different, but the Roxy’s intimacy brought out the best in the band’s low-key alternative rock melodies.

On tour now, Fences is on its way back east before swinging home for the end of the year. Soon though, fans will have more to listen to with the upcoming release of its new album Lesser Oceans. Expect to see it in January 2015. From what I heard Tuesday night, the album will be a great step for the band.