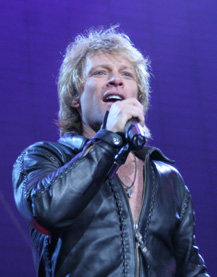 It was the night after Jon Bon Jovi’s 44th birthday, and you’d swear he wasn’t a day over 25. With more energy than most people half his age, Jon took the Staples Center by storm, belting out arena rock and power ballads for almost three hours straight.

Starting off the set separated from his band and the main stage, the black leather-clad frontman gave those at the back of the stadium unexpected front row seats. The show really took off, however, when he traveled through the crowd to the main stage to detonate an explosion of light and sound.

Pockets of fans were placed on either side of the stage to gawk, scream and clap at opportune moments throughout the set, keeping the energy level high. About a third of the tunes played were relatively new, while over a dozen of the songs were at least one or two decades old.

The most vivacious moments built-up during Bon Jovi’s mega-hits like "Livin’ on a Prayer," "Bad Medicine" and "Wanted Dead or Alive," all of which were saved until the end or encore of the show. Jon’s animated aerobics back and forth across the large stage stood in stark contrast to his mostly stationary counterparts who were confined behind their instruments. Though Jon occasionally played guitar as well, his goofy personality could only truly shine when he could jump, dance, shake, twirl and gesture at will.

A surprising highlight of the night, however, came from guitarist Richie Sambora’s lead vocals on "I’ll Be There for You," a somewhat cheesy, yet moving love song that he co-wrote with Jon in the mid-’90s. Sambora’s husky, soulful voice genuinely rivaled that of the band’s usual vocals.

Audience members were surprised and enthralled by a two song acoustic portion of the show that Jon performed right in the middle of a lower level seating section. Camera phones popped up everywhere, pouncing on him from each angle. On his slow journey back to stage, once again, Jon graciously high-fived and reached out to as many people as possible. Even when some of the more rabid fans tried to tear him apart, Jon continued to sing in a cool and collected manner.

The sold out world tour is in support of Bon Jovi’s ninth studio album, titled Have a Nice Day, which, in less than six months, has already gone multi-platinum. Though most of the band’s recent press has either been for its Top 10 Country duet "Who Says You Can’t Go Home" or for Sambora’s sudden breakup with wife Heather Locklear, Bon Jovi’s members are rock stars through and through. They are unstoppable and will undoubtedly continue to make hits that will be remembered for years to come.

To this day, is there anyone who can’t finish the phrase "Shot through the heart, and you’re to blame …?"