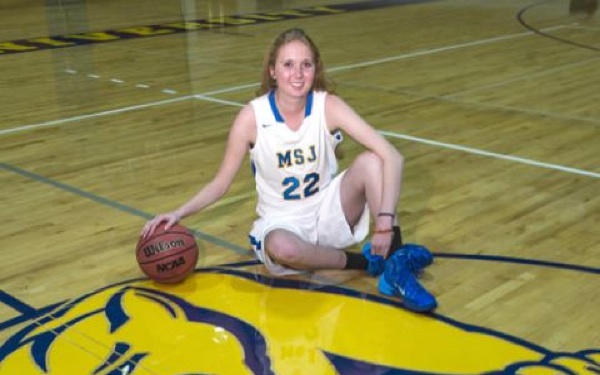 Lauren Hill is a freshman basketball player for Division III Mount St. Joseph University in Cincinnati. She has been diagnosed with diffuse intrinsic pontine glioma (DIPG), a rare form of cancer that doctors project gives her only a few more months to live. And on Sunday, she fulfilled her dream, playing in her first collegiate in front of a sold-out arena with thousands of fans chanting her name.

“This game was amazing,” Hill said after the game. "It was awesome in every way. It's a dream come true. To play on a college court, to put my foot down on the floor and hear the roar of the crowd — I just love it so much. I love basketball.”

The NCAA moved this game up two weeks to accommodate for Hill, who wants to play in Mount St. Joseph’s next game in order to continue to bring awareness to her situation, but it remains unclear if she will be physically able. Her condition has already taken a severe toll on her body. She spent much of Sunday’s game wearing sunglasses and headphones because she is very sensitive to light and sound, and deals with constant headaches and nausea.

Sunday’s game was originally scheduled to take place at Mount St. Joseph, but the overwhelming demand for tickets to see Hill play led to the game being played instead at Xavier University. Mount St. Joseph basketball games typically only have around 100 fans attending, but at Sunday’s game, 10,000 fans were in attendance. “The outpouring of support has been incredible,” said Mount St. Joseph president Dr. Tony Aretz. “We say at the Mount that we are a community that cares. To bring that to life like this is just incredible.”

The game, which happened to be the first of the college basketball season, began with a layup from Hill. She received a standing ovation from the crowd and both teams before sitting on the bench to cheer on her teammates. And it ended much the same way – Hill was inserted back into the game with 30 seconds remaining and scored another bucket. This time it was a right-handed layup, which is especially remarkable because she has lost a considerable amount of strength and coordination in the right side of her body while undergoing treatment.

At halftime, legendary Tennessee women’s basketball coach Pat Summitt presented Hill the U.S. Basketball Writers Association's ‘Most Courageous Award’ and a $5,000 check to The Cure Starts Now – an organization raising money to fight DIPG. After the final buzzer and another teary ovation for Hill, the team announced that they had raised $40,000 for cancer research.

Athletes including LeBron James, Candace Parker, Elena Delle Donne, Skylar Diggins and several members of the Cincinnati Bengals have said they are inspired by Hill’s resilience and her desire to continue playing and raising awareness for her rare type of brain cancer.

“To reach and touch this many people is amazing,” said Hill. "Not many people knew about DIPG before me, and now that they do, we can get research going to cure this cancer. I won't be around to see that, but it's going to help so many people. That's why the support can't end with this game.”

If you have the time, check out this story from ESPN on Hill. It’s really something.