Julian Casablancas + The Voidz Charm L.A. Crowd at The Wiltern 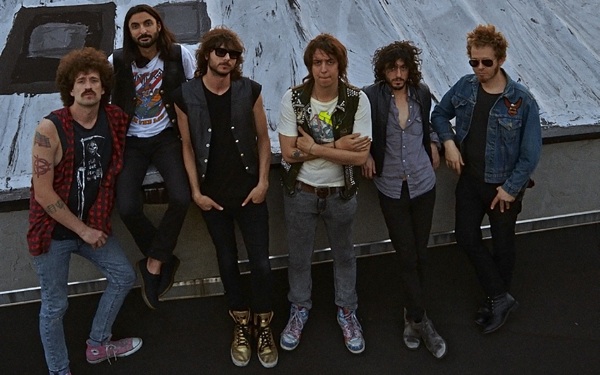 Picture a high, lost puppy dog of a musician who comes knocking at your door offering you guitar lessons for $10 an hour. As he gives his guitar lesson, you feel compelled to offer him a drink, then he drinks too much and ends up playing guitar for you all night long as you stare into his big, brown eyes. This is Julian Casablancas.

Yes, he’s a talented vocalist. Yes, he’s a great songwriter. But at the heart of it all, he’s downright charming. Besides that, I’ve never seen an artist cause such a commotion among both men (especially the men) and women during a show, with fans bopping along to each and every song off Julian Casablancas + The Voidz's new album Tyranny.

Casablancas created a push riot when he sang his 11-minute single, “Human Sadness,” Thursday night at the Wiltern. As he knelt onstage, fans quickly clamored to get even closer. Casablancas pleasured the audience with his “freestyle bantering,” which often included unintelligible jokes without a punchline, yet no one seemed to care as we laughed along anyway.

“Risky time,” as Casablancas calls it, came when he sang “Dare I Care;” he used a voice modulator à la Kanye West, giving the tune a more electrified, distorted sound that pushed the song into the experimental category. Hats off to Casablancas for creating a sound still true to his lulling falsetto baritones and intense scream fits, yet decidedly different from his work with The Strokes.

The singer paid ode to his former band by playing “I’ll Try Anything Once” and “Ize of the World,” along with Daft Punk's “Instant Crush,” a track from Random Access Memories that Casablancas appeared on. He ended the show with “Johan Von Bronx,” giving his fans an appreciative bow as he left the stage, gathering and tucking love notes into his pant pockets.

The new album’s title, Tyranny, seems fitting as Casablancas has embraced his freedom as a solo artist to fly creatively in the face of his critics. This critic, however, salutes Casablancas + The Voidz’s psych rock melodies with the clashing drums and electronic keyboard sounds of the '80s. With Casablancas, this lost puppy has been found, rarely disappointing and continuing to intrigue.