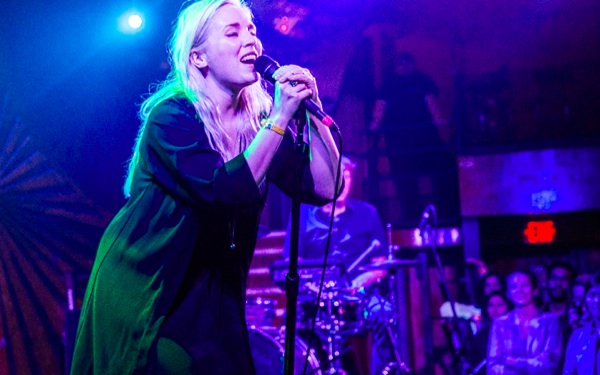 Wearing all black with her now-blonde hair tied into a single exquisite side-braid (which somehow unraveled by the end of her set), Mr Little Jeans (real name Monica Birkenes) performed at West Hollywood’s Troubadour in front of a sold-out crowd Wednesday night. To her fans' delight, she sang songs from her debut album Pocketknife, including the well-recieved “Mercy.”

“’Mercy’ might be the best of the bunch,” wrote Consequence of Sound after Pocketknife’s release, “a maelstrom of drums, hissing distortion, and classical strings that climax with a refrain (‘your hands are tied’) that’s as menacing as it is hypnotic.” During her Troubadour show, Mr Little Jeans took a moment to explain that the song “is about a friend that lies, a lot. Even when she doesn’t need to,” she laughed.

However, the crowd’s biggest reaction came when the Norwegian electro-pop singer dived into “Runaway,” a breathy and otherworldly song about being free. As Mr Little Jeans sang the up-tempo chorus ("When you run away/You can go anywhere!"), fans danced and waved on beat. The crowd’s energetic reception continued throughout the night as hipsters and girls with blue-bleached hair danced the night away, demanding an encore. Their demands were met when Mr Little Jeans, who looked so happy to be warmly welcomed by the L.A. crowd, and her band continued the set with Arcade Fire's "The Suburbs," a cover that helped catapult the singer into the spotlight. On YouTube, the cover has more than 4 million views.

Continuing on the road for a few more days, Mr Little Jeans will be finishing out her tour this coming week with California dates. She has even added another show next week (the 25th) again at the Troubadour. If you didn’t make it, or if you were like the two girls I met who were very upset that they bought tickets for the wrong day, look into tickets now.

With a sound resembling that of Lykke Li, Charli XCX and even Kylie Minoque’s, trust me when I say Mr Little Jeans is a Nordic songstress you’ll want to see perform live in person.