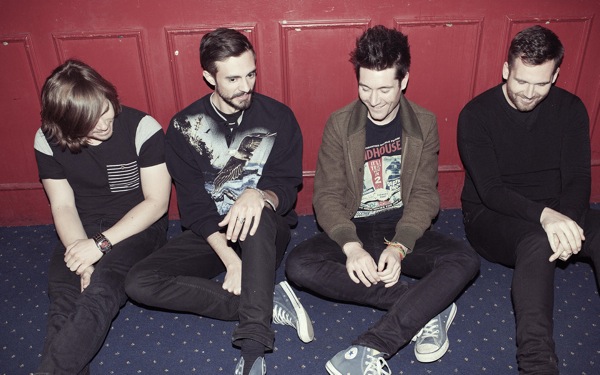 Bastille’s songs—“Pompeii,” “Flaws,” “Things We Lost in the Fire,” the list goes on—are so easy to get lost into live that the ending always feels like it has come too soon. Thankfully, the rock band, formed in 2010, almost never lets up.

Lead singer and founder Dan Smith is a man of few words, so the transitions between songs Thursday night at the Shrine Auditorium were often only separated with a genuine “Thank you so much!” He let the music speak for itself.

Smith's performance style is exuberant and powerful; he was constantly on the move, with his hands on a drumstick, clanging on a cymbal and playing the piano keys. Despite all his jumping and thrashing, his vocals never wavered. His voice remained strong and clear for the entire set, which lasted an hour and a half.

The musician was matched well by his audience, a group that was constantly in movement and making their presence heard. Spontaneous clapping to the beats erupted with almost every song, cheers were thunderous, many often sang along with the tracks, and the dancing and hand waving was relentless. There was even movement for “Oblivion,” one of the slowest songs on their album, Bad Blood. Smith preceded his performance of the hauntingly gorgeous and emotional track with, “We have some incredibly depressing songs.” To counteract that, he asked everyone to take out their phones and wave them in the air.

Importantly, the crowd wasn’t homogenous. While it was predominantly women, men still made up a sizeable portion. And while it was mostly filled with young 20-somethings, there were plenty of older fans too. Bastille shirts, leather and jean jackets, oversized sweaters and flannels were popular wardrobe choices. This fairly diverse crowd packed in the Shrine so much so that a few girls briefly passed out, surely partly due to the stuffiness. (Thankfully, they had a capable team on-site.)

The Los Angeles stop came two months after their tour had begun, and Smith announced he had been looking forward to performing in this location for a long time. The venue certainly matched up to the band, with great light theatrics and two giant confetti cannons filling the room with white and silver pieces of paper at the end of the night.

This performance comes at the heels of the United States leg of the tour, as the London band moves on to Canada, Austria, New Zealand and Asia in the next two months. As for what’s next after that, Smith seems to know as little as the audience. Before performing “Blame,” one of their new songs expected to be on the band’s next album, he announced, “I have no idea when it’s coming out, though.”

Whenever it may be, his fans are definitely ready for it.