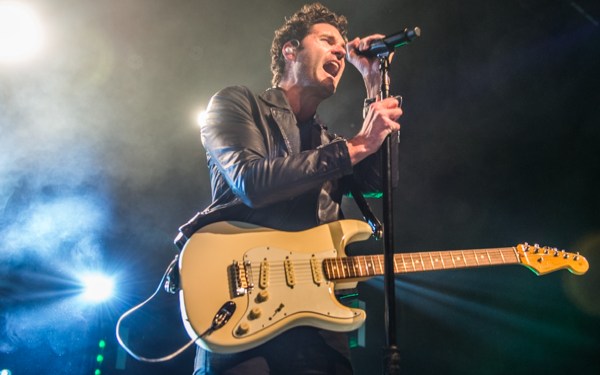 Friday night, Hollywood’s Fonda Theater was filled with date-night dancers. Taking turns between grooving and mid-concert make-out session, it was apparent the lovebirds in the audience were having a great time. It’s not every night an entire venue will break into dance in Los Angeles, but Capital Cities and their opening bands achieved just that.

Up first: Scavenger Hunt, a fabulous ‘80s band that brought out the energy with a lead vocalist that demanded the audience’s attention.

Night Terrors of 1927 were next.  The duo—made up of Blake Sennet and Jarrod Gorbel—recently played Tegan and Sara, but this night, it was all about keeping that energy high for the headliners. And the guys did that, especially with their recently released single “When You Were Mine” off the band’s Anything to Anyone EP. Expect to see Night Terrors of 1927’s debut album in 2015.

The girls in the front clearly had their favorite band members picked out as they held their breath and waited for Capital Cities to come on stage. During their trumpet-driven set, the electro-pop band was running a lottery like no other! Giving away video games, shirts and I believe a Say Anything-style boom box, Capital Cities won over the crowd right away.

Though their performance did include some bizarrely choreographed flailing-arm dances, Capital Cities gave the crowd a good time. However, trumpet player Spencer Ludwig made my night (and judging by fans’ reactions, he made their night as well!).  Giving an extra something to the songs and even more energy than some complete bands, Ludwig charmed the crowd and ran the stage.

On the radio, Capital Cities “Safe and Sound” single stands out because of the trumpet solos; when you experience the song live, it is even more memorable.