Obama: Sony 'Made a Mistake' in Pulling The Interview from Theaters [Updated] 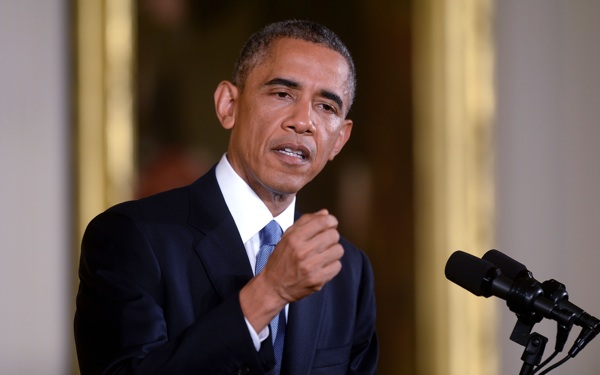 Updated at 1:09pm PDT: Sony CEO Michael Lynton told CNN that the studio has not backed down.

He continued, “I think the unfortunate part is… The President, the press and the public are mistaken as to what actually happened. We do not own movie theaters. We cannot decide what will be played in movie theaters."

In his year-end press conference on Friday, President Barack Obama answered questions about North Korea's attack on Sony and the studio's decision to pull The Interview from theaters on Wednesday after major chains such as AMC, Regal and Cinemark announced they will not show the film.

"I'm sympathetic to the concerns they faced. Having said all that, yes, I think they made a mistake," said the president. He also added, "I wish [Sony] had spoken to me first."

When asked how the U.S. government will respond to North Korea's cyber attack, which was confirmed by the FBI on Friday, Obama did not delve into details but said there will be a U.S. response.

"We will respond, and we'll respond in a place and time in a manner that we choose," he said.

The president also made clear the dangerous "pattern" that can follow when Hollywood allows threats from other countries to influence their decisions on projects.

"We cannot have a society where some dictator some place can start imposing censorship here in the United States," said Obama, "because if somebody is able to intimidate folks out of releasing a satirical movie, imagine what they'll do when they see a documentary that they don't like, or news reports that they don't like -- or even worse, imagine if producers or distributors or others start engaging in self-censorship because they don't want to offend the sensibilities of somebody whose sensibilities probably need to be offended."

The Interview stars Seth Rogen and James Franco, two reporters who go to North Korea to interview its leader, Kim Jong-un. However, the CIA employs the two to assassinate Jong-un instead.

On Nov. 24, Sony suffered a massive hack of emails and confidential data. The group reportedly responsible for the hack calls itself "Guardians of Peace" and threatened audiences and theaters in a letter that referenced the 9/11 attacks. Here is the full message:

We will clearly show it to you at the very time and places The Interview be shown, including the premiere,
how bitter fate those who seek fun in terror should be doomed to.
Soon all the world will see what an awful movie Sony Pictures Entertainment has made.
The world will be full of fear.
Remember the 11th of September 2001.
We recommend you to keep yourself distant from the places at that time.
(If your house is nearby, you’d better leave.)
Whatever comes in the coming days is called by the greed of Sony Pictures Entertainment.
All the world will denounce the SONY.

Campus Circle writer Annika Feign's review contains some of the same criticisms. "The film teeters in and out of actual humor and forceful humor," she wrote. "It also becomes heavily reliant on stereotypes."

There is no word yet on what Sony plans to do with the film.