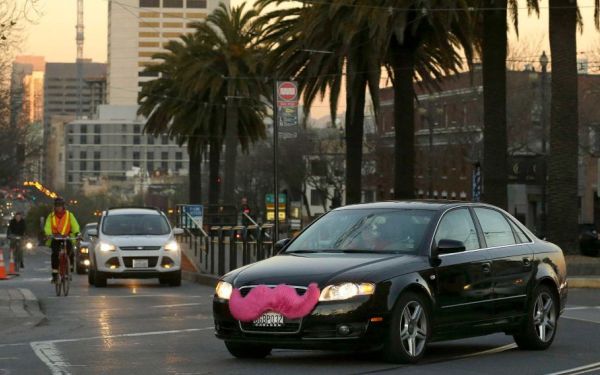 In a potentially major threat to UberX, Lyft and Sidecar, the California Department of Motor Vehicles said drivers for the services must obtain commercial license plates.

“Any passenger vehicle used or maintained for the transportation of persons for hire, compensation or profit is a commercial vehicle,” the DMV wrote in an advisory dated Jan. 5. “Even occasional use of a vehicle in this manner requires the vehicle to be registered commercially.”

The ride-hailed companies, which are regulated by the state Public Utilities Commission, arrange paid rides via smartphone apps by “citizen drivers” who use their own cars. The PUC defines them as entities providing pre-arranged transportation via an online platform “to connect passengers with drivers using a personal vehicle.”

The companies and their trade groups vigorously denounced the DMV’s memo, which would erect huge roadblocks to their thousands of drivers. Commercial registration costs more than personal registration, entails an array of paperwork and in-person DMV appointment, and likely would necessitate carrying commercial insurance, which is much more expensive than personal auto insurance.

“Requiring Lyft drivers, including those who drive just a few hours a week, to get commercial plates would essentially treat peer-to-peer transportation the same as a taxi, undermining the thoughtful work done by the CPUC to craft new rules for ridesharing in California,” Lyft said in a statement.

The DMV said an increasing number of questions from dealers and customers prompted the memo, which clarified an existing state law that dates from 1935.

However, it’s not clear whether the DMV, the California Highway Patrol or local police will enforce the requirements — and the ride-hailing companies have a history of flouting regulations. Before California became the first state to legalize them in fall 2013, they operated in defiance of cease-and-desist orders from the state and some cities. Likewise, they have expanded into cities nationwide (and internationally in the case of Uber) even when existing laws bar their services.

Drivers for Uber and Lyft reportedly have said that the companies told them they would reimbuse drivers who received citations for violating laws against airport pickups, which require permits that the companies have only recently begun to obtain.

Although their citizen-driver models are just a couple of years old, Uber and Lyft have seen rapidfire adoption by riders and drivers. Uber, which is far bigger, has some 50,000 drivers in the state, according to a report it released on Thursday, with more than 20,000 in Los Angeles, 16,000 in San Francico and about 5,000 each in Orange County and San Diego. Lyft’s numbers aren’t available.

“The California Public Utilities Commission allows (ride-hailing) drivers to use personal vehicles with personal registration on the UberX platform,” Uber said in a statement, adding that Gov. Jerry Brown’s signing of a bill regarding insurance for the companies showed him affirming that drivers may use personal vehicles.