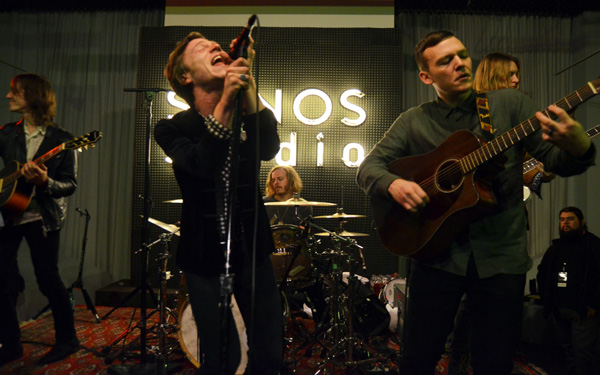 In a few days, Cage the Elephant will attend the Grammy Awards in hopes of their first statue alongside four other artists under the Best Alternative Music Album category. While music’s biggest event quickly approaches, the six-piece act from Kentucky made a special performance for Pandora at Sonos Studios in Los Angeles before an intimate crowd. Fans gathered outside La Brea avenue hours before doors opened while anxiously awaiting for the concert to begin.

Just as the crowd’s anticipation was reaching dangerous heights, lead singer Matt Shultz took the stage, receiving a thunderous ovation while the band settled before their instruments. They began their set list with “Spider Head” off their latest album. Although the space was limited, fans pressed as close as possible towards the stage giving new definitions to “intimate” and “limitations.” Typically, six people playing rock n’ roll on a small platform leaves limited wiggle room, but Shultz along with his brother Brad Shultz managed to stretch the boundaries while head banging and swapping positions throughout the night.

The nine song set list included fan favorites “Ain’t No Rest For The Wicked” and “Come A Little Closer.” Choruses were chanted by the audience, which resulted in a competitive volume match throughout the studio. Still, the band remained humble, even while addressing their weekend nomination. Simply being acknowledged is an award in itself, said Matt in between songs. Even though they’ve reached popular recognition, the band’s purpose hasn’t been altered; they will continue to focus on the top priority: making enjoyable music. Closing out the set, “Shake Me Down” drew the largest dance interaction across the floor, giving fans the private experience they anxiously anticipated.