Charged as a man, convicted as a woman: unusual criminal case in Miami 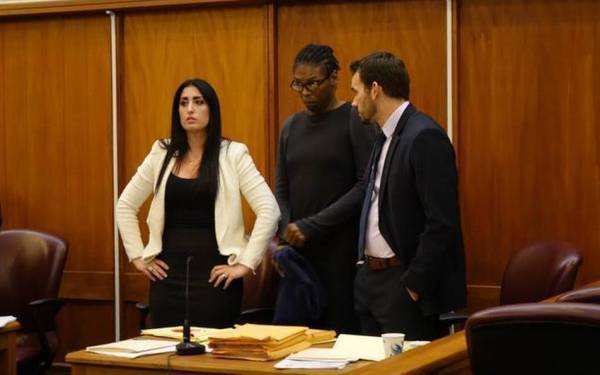 MIAMI — Nearly a decade ago, Harold Seymore was charged with sexually assaulting a female tourist on South Beach. Last week, Seymore was finally convicted of the crime — but as a woman.

Seymore’s story is a complicated one, an unusually long grind through both the criminal justice and mental health systems, all while struggling with gender identification issues. Born intersex, with functioning male and female reproductive organs, she has slowly transitioned to a woman.

For the first time in her life, Seymore donned a dress last week as she sat in a Miami-Dade courtroom to face jurors.

Her change in appearance from the 2005 arrest never took center stage but surfaced in subtle ways over four days of trial. Witnesses described a tall lanky man behind the assault. But defense attorneys, despite occasional slip-ups, made sure to call Seymore “she” while prosecutors used a neutral “the defendant.”

It took jurors just an hour to convict Seymore. On Friday, Pooler sentenced her to 15 years in prison, plus 10 years of probation. Because of her long criminal history, Seymore was designated a habitual violent offender.

Shackled and wearing an orange jump suit for the sentencing, Seymore, 31, expressed regret.

“It wasn’t my intention for this to happen,” Seymore told the victim, a 37-year-old schoolteacher from outside Chicago. “I honestly apologize for what happened.”

Transgender defendants aren’t all that unusual in South Florida, and Miami-Dade jails have special protocols for handling them. But Seymore’s case is rare — an intersex person who has gender transitioned over the decade it took to bring the case to trial.

During her years in Miami-Dade jails, Seymore was always housed in single-person safety cells, away from the male population. In the coming weeks, Seymore will be transferred to the state prison system, where she’ll be evaluated and possibly housed away from the general population with other at-risk inmates needing “protective management.”

By law, all transgender and intersex inmates are screened for their risk of sexual victimization or sexual abusiveness twice a year. But it will be a challenging new environment, said Michael Silverman, executive director of the Transgender Legal Defense & Education Fund.

“Transgender women are in extreme danger in male prisons. There is a very high rate of violence, including sexual violence,” Silverman said. “Often, prison officials resort to special housing units, which are often nothing more than solitary confinement. It can be extremely psychologically damaging.”

In an interview Friday, Seymore repeatedly referred to herself as a “hermaphrodite,” a term considered outdated by transgender and LGBT-rights advocates.

Growing up in Brownsville, a mostly African-American urban community in Miami, Seymore said she did what all the other boys did — her dual developing sexual organs remaining a secret.

“I grew up playing Street Fighter, not with Barbie dolls,” she said. “And it was safer to identify as a male.”

But even as a child, Seymore said, she secretly dreamed of one day becoming pregnant. Her first menstrual cycle came in elementary school. And as with many gay, lesbian, transgender or intersex people, childhood was a confusing, angst-ridden time.

But Seymore’s young life was particularly troubled. Her first arrest came at age 14 — for carrying a concealed weapon on school grounds. Over the years, the convictions piled up: battery on an elderly person; petty theft; disorderly conduct; cocaine possession. None was serious enough to warrant prison time. She was always booked as a man.

Serious mental health issues only worsened her troubles. Seymore was also diagnosed with bipolar disorder with psychotic features and hallucinations. Six times, between 2001 and 2006, Seymore was hospitalized for psychiatric treatment because she was ruled a danger to herself or others.

At one point, Seymore was living out of her car and was arrested after barging into her mother’s home to retrieve a pet cat. Ultimately, she went to trial — wearing a suit, but with no tie — and was convicted of trespassing.

After her arrest for the sexual battery in 2005, Seymore’s mental condition deteriorated so much she could not help her attorneys in preparing a defense. Four times over the years, judges declared her mentally incompetent to proceed and she was sent to state psychiatric facilities for rehabilitation.

It was during those stays that Seymore made it known she wanted to begin identifying as a woman, she said. Off and on, she began receiving hormone pills to aid in her physical transformation.

During stints in jail, some guards made disparaging remarks, she said, but mostly she was kept in a safety cell for her own protection.

“Twenty-three hours a day in solitary,” she said. “I got the yard by myself. I have to take showers by myself.”

Finally facing justice last week, Seymore declared she did not want to wear a suit for the trial. She chose to fully embrace her femininity.

Defense attorneys scrambled to find a dress to fit her six-foot-two, 175-pound frame. They found a Theory-brand dress in the closet of co-counsel Stacy Marczak. The mid-knee hem on Marczak was more like a mini on Seymore.

“It was a very expensive dress,” McElligott said. During jury selection, candidates were asked if they could be fair to someone who had chosen to identify as a woman. The responses were mostly positive, but one man who thought it was a “sin” was dismissed.

But Seymore’s gender transition couldn’t help but add some confusion to the proceedings. Her lawyers occasionally slipped into calling her “he.” Judge Pooler, during one legal argument, noted that public defenders were representing “this gentleman ... I mean, ma’am.”

One police officer on the witness stand seemed confused as defense attorneys referred to Seymore as “she.” The judge simply instructed him to keep answering the questions.

“We didn’t want to highlight it,” McElligott said. “And it didn’t become much of an issue.”

Seymore was an engaging presence during the trial, chatting with jail officers, quoting the Bible and even speaking decent Hebrew to the prosecutor. There were no hints of the violent personalty exhibited back in October 2005.

The victim testified that she was walking alone on a desolate stretch of South Beach sand after a night at a club. Feeling uneasy as Seymore walked by, the woman announced loudly: “Don’t follow me.” Seymore jawed back, walked past then suddenly began punching her from behind.

As she toppled to the sand, Seymore flailed away, repeatedly thrusting her fingers into the woman’s genitals, she said. “I screamed so much I could barely talk the next day. I screamed ‘rape,’ I screamed ‘police.’ “

Two passersby chased the assailant. Seymore ran away, taking the victim’s purse, only to be captured moments later by Miami Beach police officers.

Her fists balled tightly, the woman nervously identified Seymore in court. The forensic evidence was strong — the victim’s DNA was also found under Seymore’s fingernails.

Defense attorneys hoped to convince jurors that Seymore only punched, but never sexually battered, the woman. But jurors rejected the argument, convicting her of sexual battery with no great harm, battery and petty theft.

The victim testified she suffered panic attacks and sought therapy after the assault. Prosecutor Scott Thaler, while sympathizing with Seymore’s difficult life, said it was “no excuse” for the attack.

“It was not an excuse to put the victim through the beating, the trauma,” Thaler said. “There is this focus on the defendant and not how the defendant has affected other people’s lives.”

Judge Pooler agreed. “Based on everything I’ve heard, I do believe you’re a danger and you will continue to be a danger to society. And you need help.”

Because of the time she has already served in custody, Seymore will likely serve less than four more years behind bars. Though she wants to appeal, she accepted her sentence with no protest, more concerned about resuming her estrogen treatments with hopes of one day being able to bear children.

She hopes her case might serve to show the struggles of transgender and intersex people. Upon her release, she said that perhaps she’ll become a comic-book artist, and maybe change her name.